What is Green Bond?

Green bonds are a special type of financial markets bonds that has all the characteristics and pay-out structures of fixed income financial instruments, but their end use is dedicated to environmental and climate change projects such as that aimed development of renewable energy resources, pollution minimization, etc. 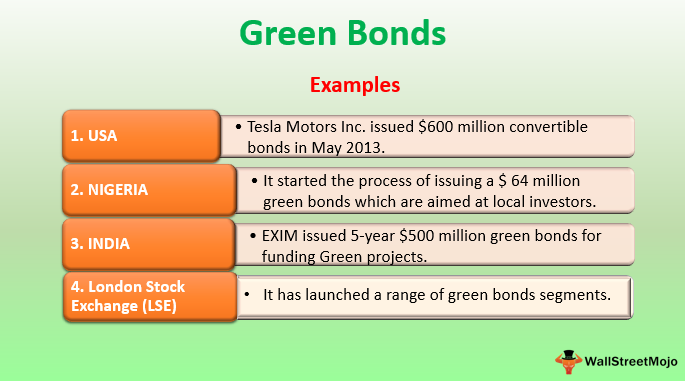 Some of the advantages are as follows.

Green bonds are on the rise, and with an increase of sensitivity towards the impact of economic growth on the environment across the globe, more and more investors will be attracted to investing in such instruments, which will lead to more issuers taking advantage of the situation and raise capital for green projects.

The rise in green bonds will also address causes like low liquidity, which will excite more institutional investors to lay aside their apprehension and come forward and participate in. At the same time, the regulators and credit rating agencies need to ensure that while on the one hand, a conducive environment is provided for self-sustenance of green bond issuance, credit rating gives a fair and accurate assessment of the risk on these bonds in addition to the end-use being green projects.

This has been a guide to what Green Bond is and its definition. Here we discuss Origin, demand, and examples of green bonds along with advantages and disadvantages. You can learn more about financing from the following articles –