Reverse Factoring refers to a concept when a firm reaches out to a financial institution to pay its suppliers at a faster rate in exchange for a discount thereby reducing the account receivables time for the suppliers without any credit crunch for the firm which in turn will be paying out to the lender at the end of predefined time duration.

Consider a scenario where a firm wants raw material to fulfill an order in another 2 months. The raw materials required are worth $ 2 million, and the firm does not have any money as of now. Also, as per the terms of the contract, it does not expect any cash inflow for another 2 months. Let’s consider the options the firm has in such scenarios.

Please note that since the lender has been arranged by the firm, hence the payment paid out to the supplier, and the discount will be based on the creditworthiness of the firm. 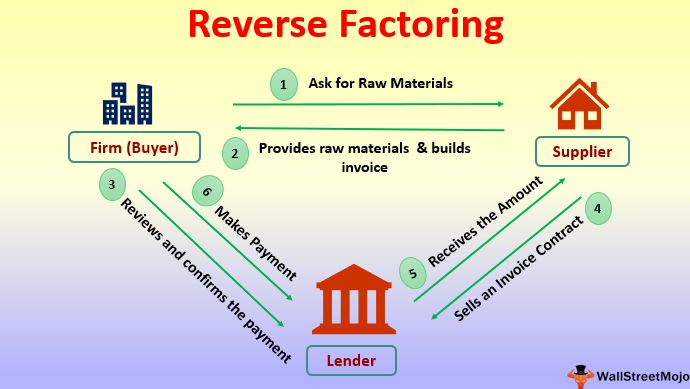 Below are the advantages of Reverse Factoring.

The following are a few disadvantages of Reverse Factoring.

Reverse factoring is a part of supply chain finance aimed at removing the frictions in the ecosystem and leading to a better flow of cash in a faster and more efficient way by focussing on one of the major touch points between the suppliers and firms – accounts payable. Unlike factoring, it is initiated by the firm rather than the suppliers to finance their account receivables. If implemented correctly, it can help in improving liquidity in the system, better cash circulation, timely payments, fewer defaults, and eventually better profit-generating capabilities for the firm as well as its suppliers.

This has been a guide to Reverse Factoring and its meaning. Here we discuss an example of reverse factoring with a scenario along with advantages and disadvantages. You may learn more about our articles below on Finance –