What is Liquidity Risk?

‘Liquidity Risk’ means ‘Cash Crunch’ for a temporary or short-term period, and such situations generally have an adverse effect on any Business and Profit making Organization. Unable to meet short-term Debt or short-term liabilities, the business house ends up with negative working capital in most of the cases. This is a familiar situation that is cyclical in nature and happens during the recession or when a particular economy is not doing well. On the other hand, the company has an obligation to pay its short-term expenses, payment to its Creditors, short term loans, etc. on a monthly basis. 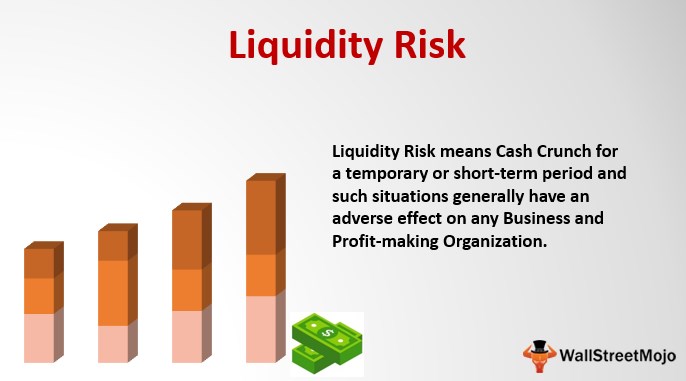 For example, if we analyze the financial ratios of Suprajit Engineering Ltd., we would find the followings:

Because of the rise in the price of Iron & Steel, Aluminum, Zinc will lower the initial margin of the business due to higher raw material costs.

One of the prime measurement of liquidity risk is the application of the Current Ratio. The current ratio is the value of current or Short-term liabilities as per Current Liabilities. The Ideal ratio is believed to be more than 1, which suggests the firm has the capacity to pay its current liabilities from its short-term assets.

Sears Holding stock fell by 9.8% on the back of continuing losses and poor quarterly results. Sears balance doesn’t look too good either. Moneymorning has named Sears Holding as one of the five companies that may go bankrupt soon.

Let us take another example of the liquidity risk of Ruchira Papers Ltd (Indian Company.

The following are the current asset and Current liability standings of Ruchira Papers Ltd for the year ended FY17 and FY18. Thus we can derive the following from the given data.

These are some classic Liquidity risk examples. In spite of higher revenue and higher profitability, the company’s current ratio has slipped marginally, whereas the excess inventory and rising Accounts Receivable put pressure on the working capital, which resulted in a decrease in Cash and equivalent and an increase of Short-term borrowings. The future operation has to done carefully so as to AR to Sales should be less than the previous year’s AR to Sales ratio, and then there should be an increase in Cash and decrease in Short-term borrowings.

Some short-term liquidity crisis may lead to a long-term negative impact on the Business.

As per one of the Ace Investor, Mr. Warren Buffet, ‘I’ve seen more people fail because of liquor and leverage.’ Thus, Mr. Buffet is emphasizing the term ‘leverage’ or ‘Borrowings’ or; ‘Debt.’

As an example of liquidity risk, the Short term and long term borrowings of Bhushan Steel Ltd. are as follows:

How is the Liquidity Risk Controlled?

There are several instances when the unexpected losses or the liquidity crunch could be overcome with smart liquidity risk management involvements, which are listed as follows:

This has been a guide to Liquidity Risk and its definition. Here we discuss how to measure liquidity risk along with examples and its interpretations. We discuss how you can control it. You may also have a look at these articles below to learn more about Corporate Finance –