Debt comes in the form of two components, i.e., principal and interest. The principal is the actual sum of money borrowed by the business or individual, and the interest is the additional charges, which are, in a way, a form of income for the lender to provide the debt.  Interest comes in various forms, and its primary types include Fixed Interest, Variable Interest, Annual Percentage Rate, Prime Interest Rate, Discounted Interest Rate, Simple Interest, and Compound Interest. 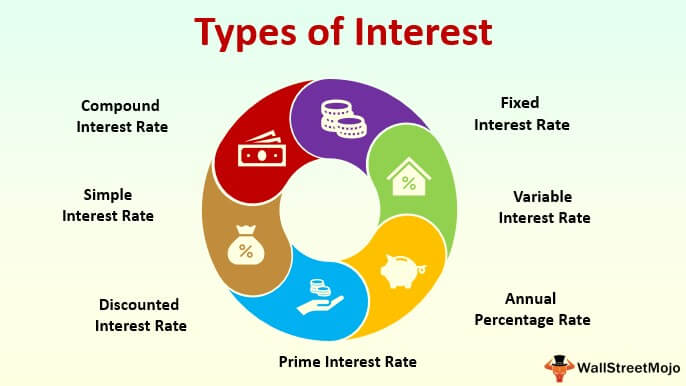 A fixed interest rate is the most common type of interest rate, which is generally charged to the borrower of the loan by lenders. As the name suggests, the rate of interest is fixed throughout the repayment period of the loan and is usually decided on an agreement basis between the lender and the borrower at the time of granting the loan. This is much easier, and calculations are not at all complex.

Annual Percentage Rate is very common in the credit card companies and credit care mode of payment methodology. Here the annual rate of interest is calculated as the amount of the total sum of interest pending, which is expressed on the total cost of the loan.

Suppose we have a credit card with 24% APR. It means for 12 months, we are charged at a rate of 2% per month. Now all months won’t have equal days; thus, APR is further divided by 365 days or 0.065%, which is called the DPR. Thus interest rate finally stands DPR or the daily rate multiplied by the daily card balance, and then further, this result is multiplied by the number of days in the billing cycle.

The prime rate is the rate that is generally given by the banks to its favored customers or with customers with a very good credit history. This rate is generally lower than the usual lending/borrowing rate. It is generally linked to the Federal Reserve lending rate, which is the rate at which different banks borrow and lend. But again, not all customers will be able to opt for this loan.

Suppose when a big corporate has a regular loan history and very good repayment history too with the bank approaches the lender for a short term loan, the bank can arrange for the same at a prime rate and offer it to its customer as a good gesture of relationship.

This interest rate is not applicable to the common public. This rate is generally applicable for Federal Banks to lend money to other financial institutions on a short-term basis, which can be as short as a single day. Banks may opt for such loans at a discounted rate to cover up their lending capacity, rectify liquidity problems, or in crisis times to prevent a bank from failing.

Suppose at times when the loans/lending becomes more than deposits in a single day; a particular bank may approach the Federal Bank to grant loans at a discounted rate to cover up their liquidity or lending position for the day.

Simple Interest is the rate of interest that a bank does for charging its customers. The calculation is very basic and is generally expressed as the multiplication of principal, interest rate, and the number of periods.

Compound Interest methodology is called interest on interest. The calculation is generally used by banks to calculate the bank rates. It is basically made on two key elements, which are the interest of the loan and the principal amount. Here banks will first apply the interest amount on the loan balance, and whatever balance is pending will use the same amount to calculate the subsequent year’s interest payment.

This has been a guide to Types of Interest and its definition. Here we discuss the list of top 7 types of interest with examples and detailed explanations. You may learn more about financing from the following articles –