What is a Negative Interest Rate?

Negative interest rate is when the banks charge interest from customers for storing cash with the bank and the prime reason for such a charge is that, at times of deflation, people generally prefer to retire money instead of spending it or investing the same.

A negative interest rate policy of banks including central banks and private banks works in the economy in such a way that the overall demand of the elements of the economy like households, industrialists, capitalists, etc. increases for products in the market.

So basically, with making the interest rate below zero, the cost of investing rises and borrowing cost reduces.  This increases consumer spending and hence, the demand for the products and services rises, in spite of the increase in the prices of goods and services in the economy. These further have two effects, the producers and suppliers are encouraged to manufacture and supply and, the bankers are incentivized to create more deposits.

Following countries are currently allowing the banks to charge a negative interest rate in their economy: 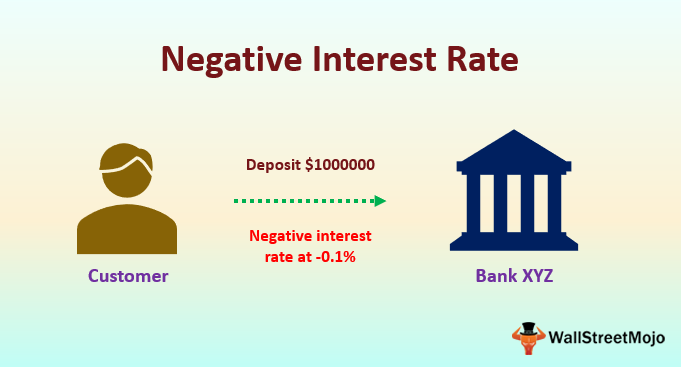 How Does Negative Interest Rate Work?

As mentioned earlier, It is one of the last resorts to boost the economy applied where other conventional ways prove to be insufficient in this situation. Basically in the situation of deflation, there is minimal pressure on banks to offer deposits. Thus by lowering the interest burden and then make it negative, the cost of borrowing of the households and companies reduces which increases the demand for loans as well as increases household spending.

They further prevent passion for the reduced costs of the cash deposits to small lenders and depositors and hoarding the cash and earning the income on such deposits. This is how the whole situation works.

Following are major risks of this rate policy in the economy:

How to Make Money from Negative Interest Rate?

Presently Europe has a policy of negative interest rate, however, there is no such policy in the United States of America. An economy is affected in the following ways due to this –