The efficient frontier, also known as the portfolio frontier, is a set of ideal or optimal portfolios that are expected to give the highest return for a minimal level of return.  This frontier is formed by plotting the expected return on the y-axis and the standard deviation as a measure of risk on the x-axis. It evinces the risk-and return trade-off of a portfolio. For building the frontier, there are three important factors to be taken into consideration:

This model was established by the American Economist Harry Markowitz in the year 1952. After that, he spent a few years on the research about the same, which eventually led to him winning the Nobel Prize in 1990.

Example of the Efficient Frontier

Let us understand the construction of the efficient frontier with the help of a numerical example:

Assume there are two assets, A1 and A2, in a particular portfolio. Calculate the risks and returns for the two assets whose  expected return and standard deviation are as follows:

Let us now give weights to the assets, i.e., a few portfolio possibilities of investing in such assets as given below:

Using the formulae for Expected Return and Portfolio Risk i.e.

We can arrive at the portfolio risks and returns as below.

By using the above table, if we plot the risk on X-axis and the Return on Y-axis, we get a graph that looks as follows and is called the efficient frontier, sometimes also referred to as the Markowitz bullet. 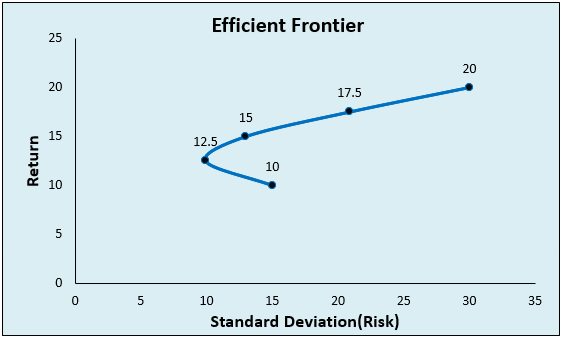 In this illustration, we have assumed that the portfolio consists of only two assets A1 and A2, for the sake of simplicity and easy understanding. We can, in a similar fashion, construct a portfolio for multiple assets and plot it to attain the frontier. In the above graph, any points outside to the frontier are inferior to the portfolio on the efficient frontier because they offer the same return with higher risk or lesser return with the same amount of risk as those portfolios on the frontier.

From the above graphical representation of efficient frontier, we can arrive at two logical conclusions:

However, the efficient frontier would be a straight line if we are constructing it for a complete risk-free portfolio.

Assumptions of the Efficient Frontier Model

To sum up, the efficient frontier displays a combination of assets that has the optimal level of expected return for a given level of risk. It is dependent on the past, and it keeps changing every year; there is new data. After all, the figures of the past need not necessarily continue in the future.
All the portfolios on the line are ‘efficient,’ and the assets which fall outside the line are not optimal because either they offer a lower return for the same risk or they are riskier for the same level of return.

Although the model has its own demerits like the non-viable assumptions, it has been earmarked to be revolutionary at the time it was first introduced.