Privatization is a measure in which the ownership and management of public sector industries (i.e., those industries which are under the control of the government) are moved to the private sector, and the same can be achieved either by outright sale of the assets of such enterprise or allowing the private individuals to participate in such industry or enterprise by removing restrictions from them. 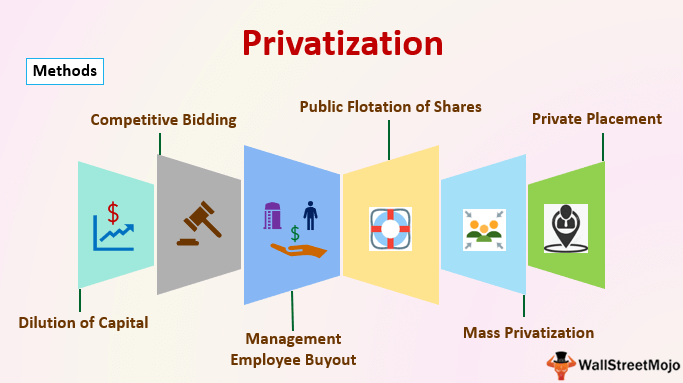 Why Is It Important?

Privatization is important for any economy as it allows opportunities to private businesses and thus allows healthy competition in the economy resulting in fair pricing of goods and services. Also, when a particular sector is privatized, it leads to job creation as more and more business houses enter the sector. Involving the private sectors also improves the quality of goods and services.

Privatization is done with a purpose to reduce the cost of goods and services by allowing access to the private businesses to the industry and thus creating a healthy competition between them, which compete among themselves to provide good quality of goods and services at better prices. It is also done when the government needs to lack resources and is unable to cater to demand.

It helps a government to create competition in the industry and increasing efficiency. However, there are certain sectors that any government should restrain from privatizing, namely, education and defense, as there are two of the most important pillars of any state.

This article has been a guide to What is Privatization & its Definition. Here we discuss the top 6 methods of privatization, its purpose, and how it works along with examples, advantages, and disadvantages. You can learn more about from the following articles –