The Full Form of RRB stands for Regional Rural Bank. They are Indian Government banks, being commercial banks, which operate at a regional level in India’s various states. They basically serve the country’s rural areas and provide them with basic banking and other financial related services. However, their area of operation may extend to some urban areas too.

The establishment of RRBs finds its route from Ordinance passed on 26th September 1975 and the RRB Act, 1976. A total of five RRBs were set up on 2nd October 1975. These banks were established following the recommendations of The Narshimham Committee Working Group. First RRB, named Prathama Bank, having its Head Office at Moradabad (U.P.) and sponsored by Syndicate Bank, was set up with rupees’ authorized capital five crores. RRBs are being owned by the Central Government (50%), State Government (15%), and respective sponsor bank (35%).

Regional rural banks play a very important role in the development of rural areas of the country. The main reason why such banks were set up was to provide banking and credit-related facilities to people belonging to rural areas, especially to farmers, artisans, laborers, and small entrepreneurs. Thus, they are responsible for the overall development of such rural areas by allowing proper flow of credit facilities and limiting the cash flows from rural to urban areas. 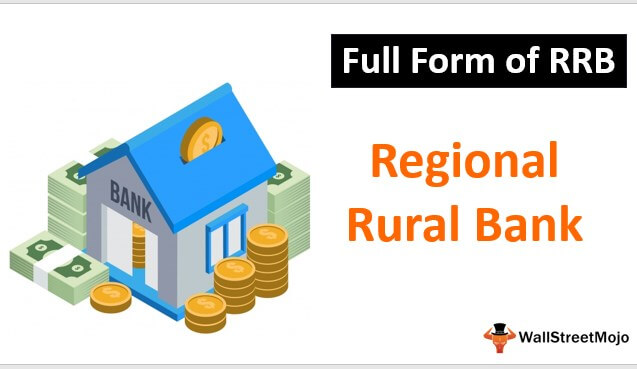 RRBs were set up with the following set of objectives.

The importance of Regional rural Banks lies in the fact that they have been able to uplift the rural sections of the society by catering to their banking and financial needs. They provide loans for crops, other agricultural activities, for artisans and cottage industries, small businesses, etc. Further, they have also been advancing loan facilities to differently-abled persons and weaker sections of society.

These banks have suffered from the following problems.

Regional Rural Banks intend to provide credit facilities to the rural and semi-urban sectors. They have helped the government with their idea to help rural India with their financial needs and also to give effect to various government schemes.

This has been a guide to the Full Form of RRB and its definition. Here we discuss the role, objectives, functions of Regional Rural Bank along with its working, advantages, and disadvantages. You may refer to the following articles to learn more about finance –