Minus Formula in Excel

In excel we do not have any inbuilt formula for subtraction or minus, we use minus operator (-) to do the arithmetical subtraction in excel, to subtract two values  from each other we need to also use the equals to operator to make minus a formula, for example, = value 1- value 2 is a minus formula where we subtract value 1 from value 2, note that the values should be in the same format to avoid error in formula.

How to Use Minus Formula in Excel?

For adding two numbers, we have the SUM function in excel. However, we do not have any subtraction formula for minus numbers in excel. A formula should start with an equal sign in the targeted cell.

We can also directly enter the values to the cell C1 itself.

Even though we can directly enter the numbers to the formula, it is always recommended to give cell references. Because giving cell references makes the formula dynamic and updates the value automatically if there are any changes.

Examples of Minus Calculation

I have data on Budgeted Cost vs. Actual Cost for the year 2018. The finance department supplied me with these two data. I need to find out the variance amount whether the budgeted cost is within the limit or not? 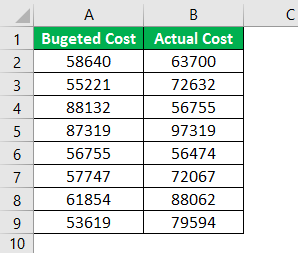 How do I find out the variance amount? I need to deduct the budgeted cost from the actual cost.

I need to deduct B2 from A2 using the minus formula. 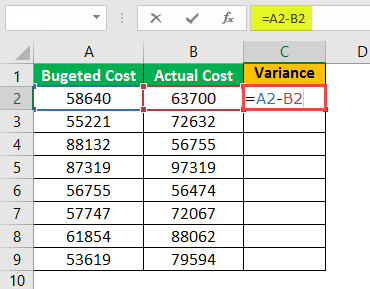 Press enter to see the result. 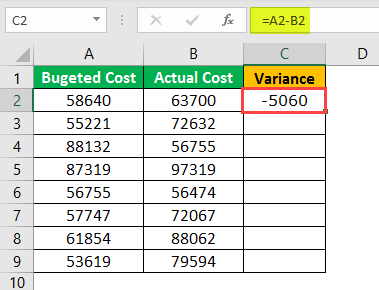 Now drag the minus formula to cell C9 for the other values to be determined,

We know the basics of minus calculation. In this example, we will look at how to deal with one negative number and one positive number.

I have data on Quarterly profit and loss numbers. 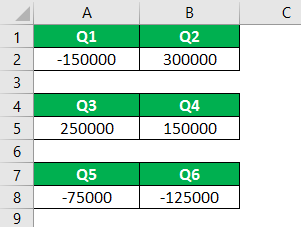 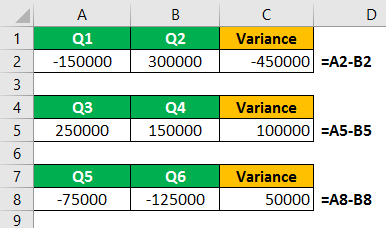 We need to alter the formula here. Rather than subtracting Q1 from Q2, we need to add Q1 to Q2. Since there are a positive number and negative numbers, we need to include the plus sing here. The basic of mathematics is plus * minus = minus. 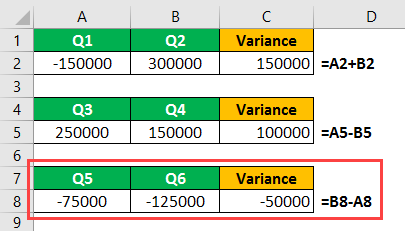 In this way, we need to do the subtraction operations in excel. You should know the basics of mathematics to deal with these kinds of situations.

Below is the data are given to me by the sales manager. This data is the individual sales data for his team. Data includes individual target and individual actual sales contribution.

He asked me to find out the variance and efficiency level percentage for each employee. 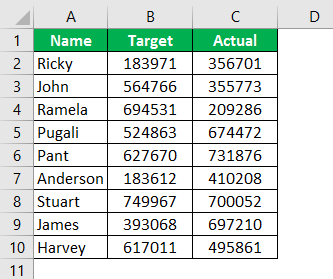 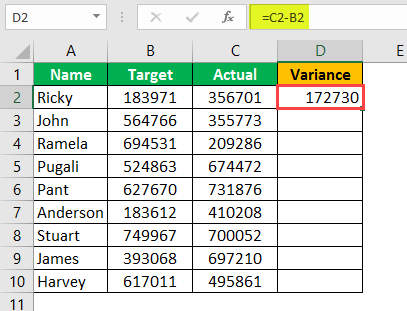 The variance amount is calculated by subtracting Actual from the Target number.

Now drag the formula to cell D10 for the other values to be determined, 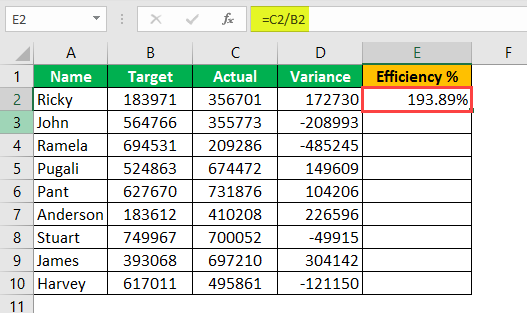 Efficiency is calculated by dividing the Actual by Target. (if the result shows in decimals, apply percentage formatting)

Now drag the formula to cell E10 for the other values to be determined, 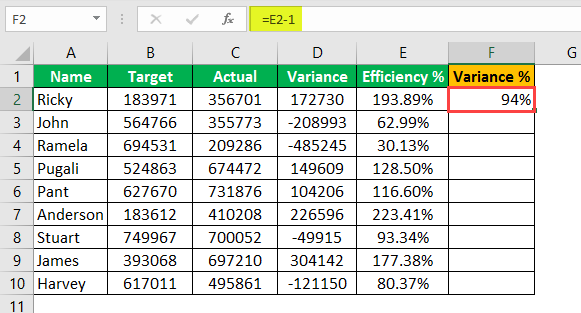 Variance percentage is calculated by deducting 1 from an efficiency percentage.

Now drag the formula to cell F10 for the other values to be determined,

This has been a guide to Excel Minus Formula. Here we discuss how to use the minus formula in excel with examples and downloadable excel templates. You may also look at these useful functions in excel –