Full Form of CIF is Cost, Insurance, and Freight. CIF can be regarded as an expense that includes costs, insurance, and freight, which is required to be borne by the seller of the goods until these goods are loaded onboard the vessel, and the liability of the concerned goods passes on to the buyer from the seller the moment the freight loads.

The characteristics of CIF are provided as follows: 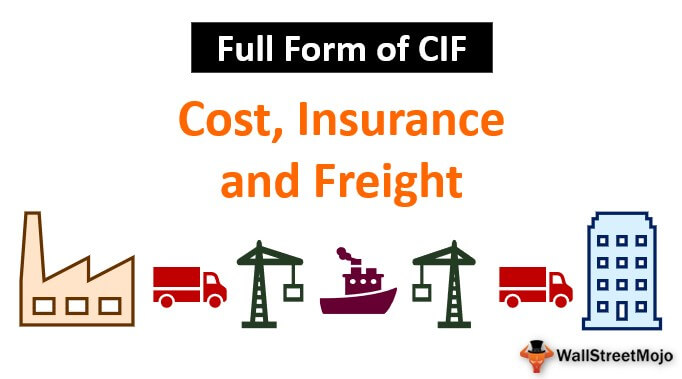 But when the ordered goods were in transit, there was damage caused to a few numbers of washing machines due to inappropriate handling. ABC Limited placed the order using cost, insurance, and freight; therefore, it is not responsible for bearing the losses caused by such damage to ordered goods in transit. Whirlpool will be responsible for bearing all the losses caused by damage to washing machines during transit of the same to the XYZ port.

The most significant disadvantage of a CIF could be that the potential risks of loss or damage caused to the goods in transit are transferred to the importer or the buyer during the contract. In a CIF contract, the risk passes on to the buyer as soon as they make the payment and take the document. The exporter might sometimes take this loophole to their advantage and might load defective or damaged goods. If the goods are lost due to some mishaps while in transit, then the number of goods lost might go unascertained, and the buyer would ultimately bear the impact of the same.

CIF is the most common method used in import as well as export shipping. It is the short form used to address cost, insurance, and freight. CIF can be defined as a mechanism under which the seller bears the costs, insurance, and freight of the ordered goods until the cargo arrives at its destination port that is mutually decided in the agreement. The goods’ liability upon being shipped to the destination port passes on from the seller (exporter) to the buyer (importer). To conclude, it can be said that it is an expense that is incurred by the exporter against potential risks such as loss or damage to ordered goods while the same is in transit to the port mutually decided by the parties in the sales contract.

This has been a guide to the Full Form of CIF, i.e. (Cost, Insurance, and Freight) and its definition. Here we discuss the characteristics and example of CIF along with their differences, advantages, and disadvantages. You may refer to the following articles to learn more about finance –