Positive Correlation is the positive relationship between two variables wherein the movements of variables are positively linked and therefore, if one variable goes up and the other variable also goes up, and vice-versa.

COV(X,Y) = Covariance between X and Y

There are mainly three types of positive correlations – 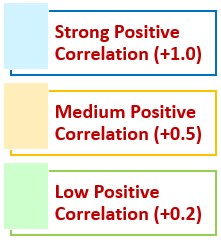 Correlation between stocks and markets are measured by Beta in Finance. If a stock has a beta of 1, then it means that if the market on an average gives a 10% return, then the stock will also give a 10% return. So it moves exactly like the market.

As the Export of a particular country increases, so the demand for the home currency in the international currency market increases because people will need your home currency to make payments for the goods purchased from your country. So the Home currency starts appreciating. This is a Positive Correlation between currency and Exports.

Positive Correlation is a very important measure that helps us to estimate the degree of the positive linear relationship between two variables. It is the most important measure that is being used by investors and fund managers to increase or decrease risk in a portfolio. It helps us to predict many financial downturns beforehand. If a particular market is positively related to GDP, and if GDP falls, then it can be predicted that the market will also fall. So tracking correlations between variables will help us to understand the movement of one variable with respect to another.

This has been a guide to Positive Correlation and its definition. Here we discuss examples of positive correlation along with its types and differences from negative correction. You can learn more about from the following articles –