What is Open Market Operations? 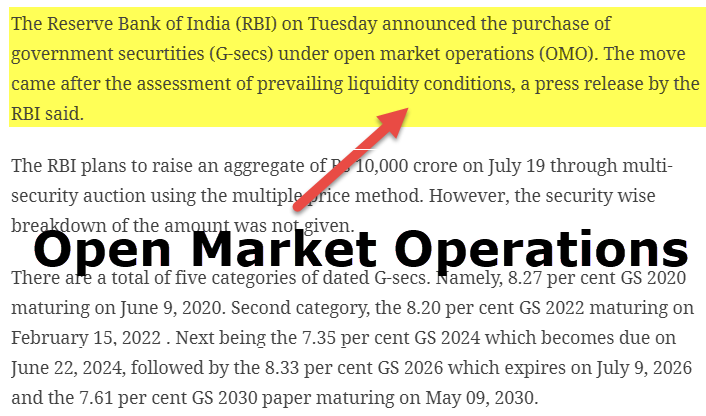 The central bank takes either of the following two main steps based on the economic conditions which are known as Open market operations:

Let us discuss each step of open market operations in detail:

When the central bank of the Country buys government bonds the economy is usually in the recessionary gap phase with unemployment being a big problem.

There are two types of open market operations:

This is involved in outright buying and selling of government securities.  Such an operation is taken to have long-term benefits like inflation, unemployment, accommodating the trend of currency in circulation etc.

This is usually done for the reserve requirements that are transitory in nature or to provide money for the short term. Such an operation is done using either repo or reverses repos. A repo is an agreement by which a trading desk buys a security from the central bank with a promise to sell it at a later date. It can also be considered as a short-term collateralized loan by the central bank with the difference in the purchase price and the selling price as the interest rate on the security. Under a reverse repo, the trading desk sells the security to the central bank with an agreement to buy at a future date. Overnight Repos and reverse repos are used for such temporary open market operations.

Let’s understand the Open Market Operations Examples with the help of one more example:

Open market operations are the central bank’s monetary policy tool to maintain inflation, interest rates, money supply and liquidity in the economy. The central bank can buy or sell securities under such operations depending on the economic conditions. Permanent measures are generally taken to target inflation and interest rates for the short-term duration while temporary measures are generally taken to check liquidity in the system for the near-term duration. Depending on whether the general public buys or sells securities impacts the general public and business houses as the loans may get costlier or cheaper respectively.