Reflation is a scenario where the central bank takes various initiatives to reduce the marginal rate of lending with respect to rate that it lends to commercial banks and this, in turn, enhances the supply of funds in the economy as a result of which banks attain greater liquidity and it also helps in boosting the economy by lowering the tax burden or increasing the supply of money.

The following are the components of Reflation:- 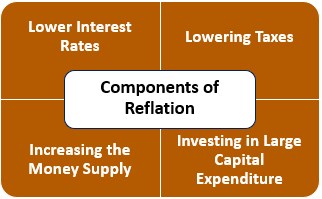 In the scenario of reflation, the central bank lowers their marginal lending rate the rate it lends to commercial banks which in turn increase the money supply in the economy as the banks have greater liquidity now on their hands and also leads to production and economy expansion

As every government charge taxes from the citizen of their country, it serves as revenue for the government. In case of reflation when the commodity prices are low and no expansion is taking place in the economy the government tends to decrease the tax rate which it charges from his citizens which leads to an increase in the spending capacity of the people and also leads to increase in consumption and consumer spending

The government also runs a fiscal deficit in times of reflation where the economy is not expanding and jobs are not being created. The government in these times tends to do large CAPEX and invest in large infrastructure projects which in turn leads to job creation and employment generation

Calculation of Reflation with Examples

We can better understand the concept of Reflation with the help of an example.

Imagine a country in 2016 has an inflation rate of 2.5% in the said year and now in 2017 the country is suddenly experiencing deflation of 2% due to non-existent customer demand and money supply in the economy.

Imagine a country in 2013 has an inflation rate of 1.5% in the said year and now in 2017 the country is suddenly experiencing deflation of 2% due to non-existent customer demand and money supply in the economy.

Reflation refers to the combination of monetary and fiscal policy initiatives aimed to combat the effect of deflation or lower economic output and is usually done by increasing the money supply, lowering interest rates and tax rate and investing in CapEx. When there is a state of deflation or there is degrowth in the economy the government adopts measures of Reflation in order to restore the economy back to normal levels.

Hence, reflation has both advantages and disadvantages and it is like the two sides of the same coin and therefore the government in discussion with the apex bank of the country which is regulating the money supply of the economy should use the reflation tool to stimulate demand and consumer spending with great clarity and carefulness.

This has been a guide to what is reflation and its definition. Here we discuss Reflation components and see how it affects the economy along with examples, advantages, and disadvantages. You can learn more about financing from the following articles –