Lorenz Curve, named after American Economist Max O. Lorenz, is a graphical representation of an economic inequality model.  The curve is a while taking the population percentile on the X-axis and Cumulative wealth on the Y-axis. Complementing this graph would be a diagonal line at 45⁰ angle from the origin (meeting point of the X & Y axis) indicating the perfect income or wealth distribution among the population.

Below this straight diagonal line would be this actual distribution Lorenz curve and the area enclosed between the line and this curve is the actual measurement of inequality. The area between the two lines expressed as a ratio to the area under the straight line gives a representation of the inequality and is called the Gini Coefficient (developed by the Italian statistician Corrado Gini in the year 1912).

Following is the example to understand the Lorenz curve with the help of a graph.

Let us consider an economy with the following population and income statistics:

And for the line of perfect equality, let us consider this table:

Let us now see how a graph for this data actually looks: 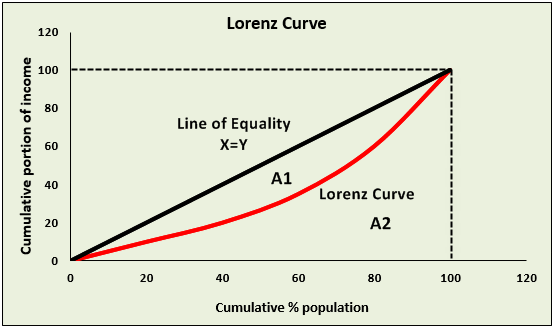 As we can see, there are two lines in the graph of the Lorenz curve, the curved red line, and the straight black line. The black line represents the fictional line called the line of equality i.e. the ideal graph when income or wealth is equally distributed amongst the population. The red curve, the Lorenz curve, which we have been discussing, represents the actual distribution of wealth among the population.

By this, we can say that in measuring income inequality, there are two indicators:

Income inequality is a pressing issue across the world. So, what are the reasons for inequality in an economy?

Uses of the Lorenz Curve

To conclude by summarizing what we have learned, Introduced more than 100 years ago, the Lorenz curve provides an innate and complete understanding of the income distribution and provides the basis for inequality measurements through the Gini Index.

The extent to which the curve bulges downward below the straight diagonal line called the line of equality indicates the degree of inequality of distribution. This implies the curve will always be bowed downwards until there exists inequality in the economy.

Though considered to be the simplest among all other measures of inequalities, the graph can be misleading and might not always produce accurate results.

This has been a guide to what is the Lorenz Curve and its definition. Here we learn how the Lorenz curve measures inequality with the help of examples and its limitations. You can learn more about economics from the following articles –