What is GDP Deflator?

It’s a measure of price inflation/deflation with respect to the specific base year and is not based on a fixed basket of goods or services but is allowed to be modified on a yearly basis depending on consumption and investment patterns.

The GDP deflator of the base year is 100.

How to Calculate GDP Deflator?

Here, we have used the following data for the calculation of this formula. 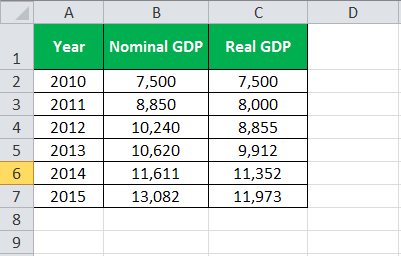 In the below template, we have calculated this Deflator for the year 2010 using the above-mentioned formula of GDP Deflator. 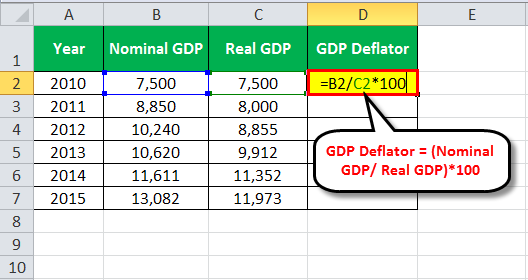 So, GDP Deflator calculation for the year 2010 will be – 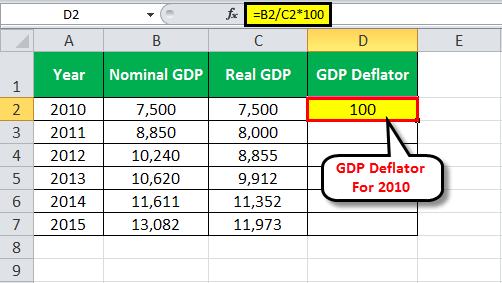 Therefore, GDP Deflator calculation for all years will be – 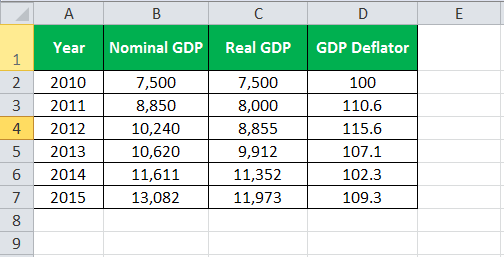 The GDP deflator can also be used to calculate the inflation levels with the below formula:

Extending the above example, we have calculated the inflation for 2011 and 2012.

Though measures like CPI (Consumer Price Index) or WPI (Wholesale Price Index) are existing, the GDP deflator is a broader concept due to:

The below graph shows the GDP Deflator of the Indian Economy:

As can be seen the GDP deflator is steadily increasing from 2012 and is at 128.80 points for 2018. A deflator above 100 is an indication of price levels being higher as compared to the base year (2012 in this case). It’s not necessary that inflation is occurring but one can experience deflation after a period of inflation if prices are higher compared to the base year.

Despite the presence of GDP Deflator, the CPI seems to be the preferred tool used by economies for ascertaining the impact of inflation in the country. Let us look at some of the critical differences between GDP Deflator vs CPI

This has been a guide to what is GDP Deflator. Here we discuss how to calculate GDP Deflator using its formula along with practical examples and its importance. We also discuss GDP Deflator vs CPI. You may learn more about economics from the following articles –