What is Equity in Economics?

Equity in economics is defined as process to be fair in economy which can range from concept of taxation to welfare in the economy and it also means how the income and opportunity among people is evenly distributed.

Every nation should have a common economic objective which is defined as being fair and even in the distribution of income and opportunity among people. The absence of equity creates a scope of inequality in the market. 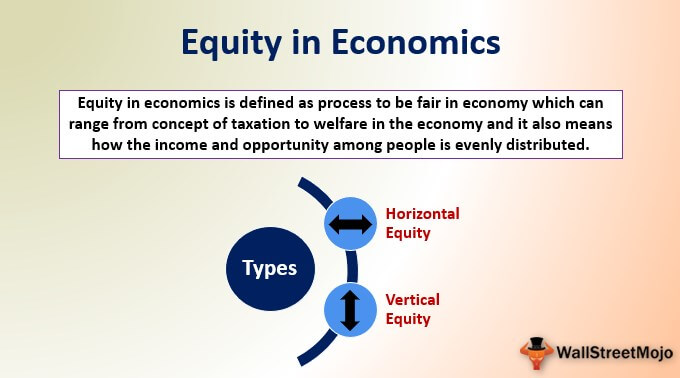 There are primarily two types of equity in economics which are defined as Horizontal equity and Vertical equity.

In this type of economic environment, everyone is treated equally and there is no scope of special treatments or discrimination based on caste/creed/gender/race/profession. An example to support this can suppose there are two persons earning $10,000. Both the person must pay the same amount of tax and there should be no discrimination between the two. Thus, the type of economy demands a system of tax where there is no discrimination and no extraordinary treatment is given to individuals or companies.

Vertical equity is more concerned with the process of redistributing the earned income of common people among the others in the society by means of tax and taxation rules. This means a person who is earning more should also pay more tax or redistribute his/her income as tax. This type of equity calls for advanced or progressive taxation laws. An example to support vertical equity is like the tax laws which we have where taxes contribute to the vertical amount. Here the person earning more must pay more tax and vice versa.

Examples of Equity in Economics

Why Equity is Important in Economics?

This has been a guide to What is Equity in Economics & its Definition. Here we discuss the types of equity in the economy and why equity is important in economics along with examples. You can learn more about from the following articles –