Buffer stock system can be defined as a government scheme that is used for the purpose of stabilizing prices in a volatile market in which stocks are bought and stored during good harvests in order to disallow prices from falling below the price levels or a target range and stocks are released during harvests for preventing prices to rise above the price levels or a target range. 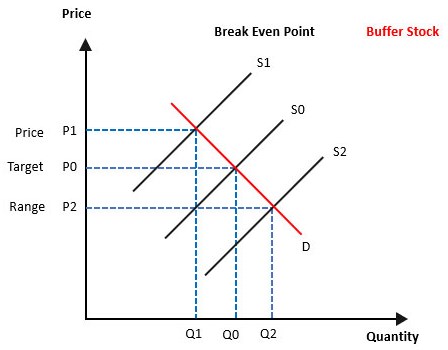 Examples of the Buffer stock

There are several different examples.

In genesis wheat stores, Joseph stored stock of wheat for at least 7 years of feast, and in this way; it became possible for him to distribute wheat from his stores during the 7 years of famine.

It was established in China in the first century with the aim of stabilizing supply by means of purchasing grains during good years and getting the same distributed to regions that are facing shortages. Henry A. Wallace revived this idea from the history of Chinese culture.

This policy comprised of minimum prices for multiple foodstuffs. This encouraged oversupply of various foodstuffs. As a result of this phenomenon, the EU was left with no choice other than buying the surplus. The surplus was then stored in huge warehouses. However, this scheme turned out to be a failure since it became highly expensive for the participants to continue purchasing the surplus. Also, there was hardly any shortage. At least, the EU was compelled to implement quotas in order to limit the excess of supplies and common agricultural policy was slowly reformed in order to minimize the overall targeted minimum prices.

The importance of the buffer stock system is realized during the fixation of procurement targets. Buffers stocks are excess of stocks of food items that are stored in the godowns. This system helps in the even distribution of food items in various parts of a particular country. These food stocks can be taken into use for satisfying the food requirements during the time when there is a fall in production levels on account of diseases in crops, or due to extreme weather conditions such as droughts and floods. It helps in regulating and controlling prices constantly. With this system, sending food supplies to areas in distress on time gets really convenient.

Some of the advantages are given below:

Some of the disadvantages are given below:

Buffer stock system can be learned as a government scheme that is used for the purpose of stabilizing prices in a volatile market. The scheme aims at stabilizing the prices, ensuring the uninterrupted supply of goods, and preventing farmers and producers from going out of business as a result of an unexpected fall in prices. Genesis wheat stores, ever-normal granary, EU cap, International cocoa Organization (ICCO), and 1970 wool floor price scheme Australia are few examples of a buffer stock scheme.

This has been a guide to buffer stock and its meaning. Here we discuss examples and differences between buffer stock & safety stock along with advantages and disadvantages. You may learn more about financing from the following articles –