The calculation of real GDP per capita will be done by using the below steps:

Country MNS has a nominal GDP of $450 billion and the deflator rate is 25%. The population of the country MNS is 100 million. You are required to calculate real GDP per capita.

We are given all the desired inputs to calculate Real GDP per capita.

Therefore, the calculation will be as follows, 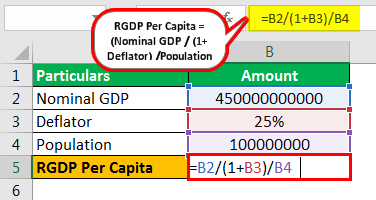 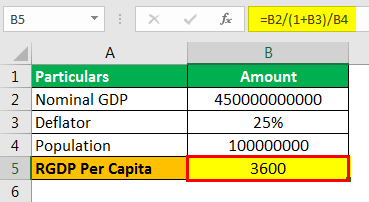 MCX is a developed economy and it is that time of the year when they are required to submit the GDP data which includes per capita as well. Below is the information gathered by the statistician department: The population of the country is 956,899 as per the last census report available. Based on the information given you are required to calculate Real GDP per capita assuming that the deflator to be used is 18.50%. 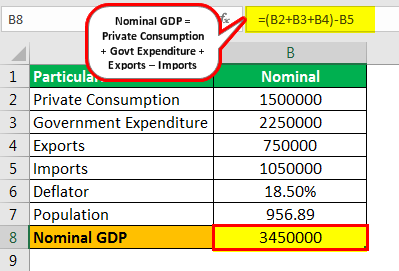 Therefore, the calculation of Real GDP Per Capita will be as follows, 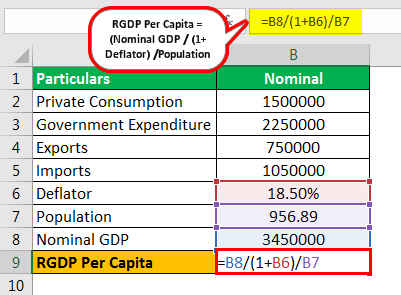 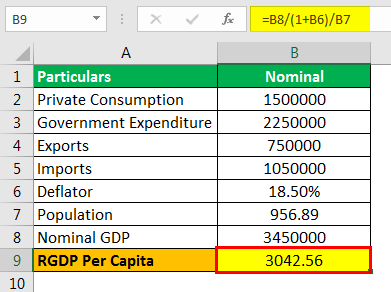 The analyst is looking for the next developing country where she can invest the clients’ funds of approx. $140 million. She has shortlisted 3 developing countries and now wants to select the country where she can invest either in the stock market or the bond market. Her criteria to select the country with the highest real GDP per capita. Below are the details that she has collected.

If the difference in the GDP per capita is less than 10k then she will invest the client’s funds in the ratio of real GDP per capita.

You are required to calculate the real GDP of the three countries and determine where she would be investing and what would be the allocation of $140 million of the investment amount.

Therefore, the calculation of Real GDP Per Capita will be as follows,

Similarly, we can calculate Real GDP Per Capita for remaining countries.

Now from the above calculation of Real GDP, we can notice that the differences between all of them are less 10k and hence she would be investing in all the three countries with a ratio of Real GDP per capita and the investment, therefore, shall be: 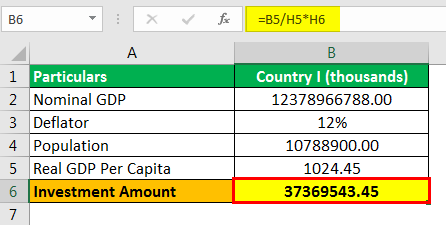 Similarly, we can calculate the investment amount for the remaining countries.

It is widely used in the world to make a comparison of the standard of living across countries over a time period. Per capita would mean what is the GDP per person for that economy. The higher the figure the better it is. Nominal GDP includes inflation and hence when one makes the comparison of Nominal GDP over different time periods then it would also include growth with respect to inflation and which would inflate the growth rate and the real picture would be hidden. Hence, using real GDP removes the effect of inflation which makes comparison smother.