Microeconomics deals with the conduct of the individuals and firms on the use of limited resources and allocations of those resources among possible alternatives. The analysis of demand and supply, price equilibrium, labor expenses, production are in the limit of microeconomics. Macroeconomics is a broad term, deals with decisions making and behaviour of the whole economy. The main concerns are GDP, unemployment, growth rate, net export, etc. Macroeconomic analysis is used by the government for policy-making decisions.

In short, Macroeconomics is a ‘top-down’ approach and is in a way, a helicopter view of the economy as a whole. It aims at studying various phenomena like the country’s GDP (Gross Domestic Product) growth; inflation and inflation expectations; the government’s spending, receipts, and borrowings (fiscal policies); unemployment rates; monetary policy, etc. to ultimately help understand the state of the economy, formulate policies at a higher level and conduct macro research for academic purposes.

For example, Central Banks of all the countries majorly look at the macroeconomic situation of the country and also the globe in order to make crucial decisions like setting the country’s policy interest rates. But it is worth mentioning that they look at micro aspects also.

If you have been following recent global financial and economic events, the most talked about is the topic of the USA Federal Reserve’s course of interest rate hikes. In a year, the Federal Reserve holds eight scheduled meetings for two consecutive days to decide and convey their policy stance known as ‘FOMC meetings’ (Federal Open Market Committee meetings).

The meeting majorly focuses on macro policy and stability based on data analysis and research, the conclusion being whether they should hike their policy interest rate or not. This meeting is part of a macroeconomic policy given that it looks at the economy as a whole and an outcome is a macro event.

Microeconomics, in short, is a ‘bottom-up’ approach. Detailed, it comprises the basic components that make up the economy which include the factors of production (Land, Labour, Capital and Organization/Entrepreneurship). The three sectors of the economy – agriculture, manufacturing, and services/tertiary sectors and the components thereof understandably come up because of the factors of production. Microeconomics largely studies supply and demand behaviors in different markets that make up the economy, consumer behaviour and spending patterns, wage-price behavior, corporate policies, impact on companies due to regulations, etc.

For those who have been following the Indian growth story, you would be aware of the fact that the monsoon could have an impact on inflation especially food inflation. A bad monsoon could increase inflation given that the supply of fodder, vegetables, etc. doesn’t match the demand and a good monsoon could decrease/stabilize inflation due to obvious reasons. This affects the spending behaviour of individual consumers, agrarian-based corporates and their like. (More on supply and demand coming up!)

Yes, you saw it coming – macro and microeconomics are two sides of the same coin i.e., they have several things in common despite looking like seemingly different topics. Though there’s no thin line of difference between the two, they are interrelated. So let’s see what they have in common.

Let’s see the top differences between macroeconomics vs microeconomics.

The following section will surely help you appreciate economics a lot more with many interesting concepts that one comes across than just know the commonalities between the two.

This relationship between demand and supply attains the ‘state of equilibrium’ or the optimal relationship when the quantity demanded and quantity supplied are equal. When they aren’t equal, what arises is either a shortage or excess which gets adjusted to achieve equilibrium again. 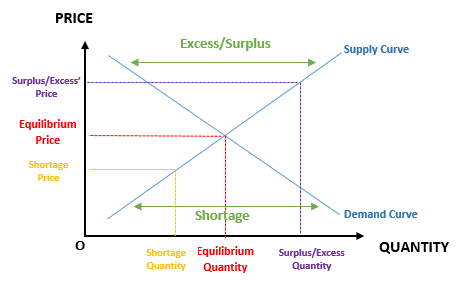 The graph above looks complex isn’t it? Honestly….it isn’t. The graph is a depiction of the concept of ‘Equilibrium’, the vertical axis (Y-axis) representing ‘Quantity’ both demanded and supplied whereas the horizontal axis (X-axis) represents the ‘Price’ of the product/service. The explanation below should make it simpler for you!

This is a fundamental law that governs economics and daily life, be it macro or microeconomics. Whether equilibrium is attained always, the dynamics beyond demand and supply is a totally different topic!

Both these branches of economics are interrelated, but their approach is different towards the economy. The following are the main differences.

How Does Macro Affect Micro?

Let’s assume the nation’s Central Bank cuts the policy interest rate (a macro impact) by 100 basis points (100 bps = 1%). This should ideally lower the borrowing costs of commercial banks with the Central Bank, helping lower their deposit rate, thus giving room to lower the rate on the loans they make to individuals and corporate.

This is expected to cause a rise in borrowings aka ‘credit growth’ given cheaper access to credit and therefore greater investment helping corporate invest in new assets, projects, expansion plans, etc. which are developments on the micro front. This is just one of several examples where macro policies and decisions affect the micro economy. Additional examples can include:

How Does Micro Affect Macro?

One of the multiple factors that set macro policies is the condition of the micro economy. To continue with the earlier example of the Central Bank given that they have lowered their policy rates, they observe the borrowing and investment patterns of corporates, individuals and households.

These behavioural patterns can help determine whether the Central Bank should cut rates further if the outlook is weak, keep rates on hold or increase them if the outlook is picking up or shooting up. Additional examples include the following:

A Tinge of Important History

There’s more history apart from the fact that Adam Smith and J.M. Keynes were the so-called ‘fathers’ of micro and macro-economics. It is believed that Macroeconomics majorly evolved from an economic crisis, the infamous ‘Great Depression’ from 1929 to the late 1930s where J.M. Keynes and Milton Friedman played a major role in explaining and understanding the event. J.M. Keynes wrote a book titled ‘The General Theory of Employment, Interest, and Money’ where he sought to explain the Great Depression through aggregate expenditures, income levels, employment levels and government spending – Keynesian Economics.

If you understood the above paragraph and its various inter-linkages, you are on the verge of becoming an upcoming economist and a good economic thinker. If you didn’t totally understand it, you are going to start thinking more about economics and the more you think about it, the more you would appreciate it.

It is evident that both are mutually interdependent and correlated. The understanding of both branches is very important for every economy. For solving economic problems and improving the health of an economy an accurate analysis of micro and macroeconomic factors are important.