Every organization nowadays, whether it is any multinational company, small proprietorship, school or college, etc., uses MS Excel to maintain their data and analyze the data for making decisions. In schools, there are more than 1000 students in various standards and divisions. It is difficult to maintain their data manually in registers. That is why the management of schools uses MS Excel to maintain data of students. In the excel mark sheet, we have to manipulate the marks of students in various ways to evaluate their performance and give the result. 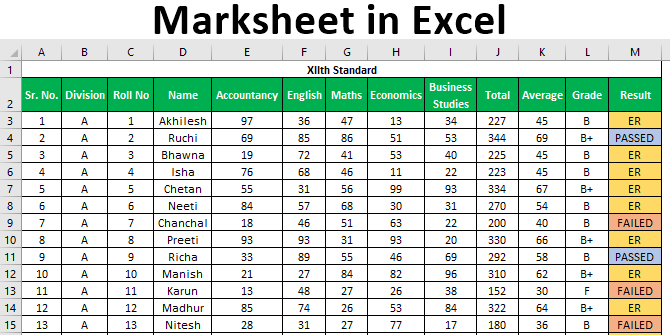 How to Make Marksheet in Excel Format?

Let us understand how to create a mark sheet in excel.

Suppose we have the following data for marks scored in various subjects by 120 students.

We want to find the total marks scored, an average of marks (this will also help us to give students grades), and a result that whether the student is passed or failed.

To find out the total, we will use the SUM

The syntax for the SUM in excel is as follows:

This function takes 255 numbers in this way to add. But we can also give the range for more than 255 numbers too as an argument for the function, to sum up.

There are various methods to specify numbers as follows:

In this method, we use commas for specifying and separating the arguments. We have specified or selected various cells with commas.

In this method, we have used the ‘Shift’ key after selecting the first cell (E3) and then used the Right Arrow key to select cells until I3. We can select continuous cells or specify the range with the colon manually.

After entering the formula for the first student, we can copy down the formula using Ctrl+D as a shortcut key after selecting the range with the first cell at the top so that this formula can be copied down.

This function returns the average of its arguments.

For evaluating the average in the excel mark sheet, we will use the AVERAGE function in the following way. We will select marks scored by a student in all 5 subjects.

The average will be –

We will use Ctrl+D to copy down the function.

As we can see that we have got values in decimal for average marks, which doesn’t look good. Now we will use the ROUND function to round the values to the nearest integer.

This function is used to round the values to the specified number of digits.

The syntax for the ROUND function in excel is as follows:

We have used the AVERAGE function for number argument and 0 for num_digits.

After pressing Enter, we will get the desired result, i.e., number with no decimal digit.

The average will be –

Now to find out the grade, we have the following criteria.

We have used the following formula to evaluate grade in the excel mark sheet.

Let us understand the logic applied in the formula.

As we can see that for ‘logical_test,’ which is the criterion, we have given a reference to K3 cell containing AVERAGE of marks and have used logical operators, which is ‘Greater Than’ and ‘Equal To’ and then compared the value with 90.

For the ‘value_if_true’ argument, we will specify text (Grade) within double quotes, i.e., “S.”

For the ‘value_if_false’ argument, we will again start writing the IF function as we have many more criteria and the corresponding grade to assign if this criterion is not satisfied.

Now we have started writing the IF function again for the ‘value_if_false’ argument and specified the criteria to compare average marks with 80 this time.

The result will be –

If average marks are greater than or equal to 70 but less than 80 (first IF function criteria), then Student will get an ‘A’ grade.

In this way, we will apply the IF function in the same formula for 5 times, as we have 6 criteria.

Make sure as we have opened brackets for, IF function 5 times, we need to close all brackets.

For finding out Result whether a student is “PASSED” or “FAILED,” we have to apply the following criteria.

As we need to evaluate a number of subjects in which student has scored less than 33, we need to use the COUNTIF function, which will count numbers based on the specified criterion.

The syntax for the COUNTIF function is as follows:

The syntax for AND function excel is as follows:

In the AND function, we specify the criteria. If all the criteria are satisfied, then only TRUE comes. We can specify up to 255 criteria.

The formula which we have applied is as follows:

The result will be –

Things to Remember about Marksheet in Excel

This has been a guide to marksheet in excel. Here we discuss how to make mark sheets in excel format using different functions (Sum, Average, Round, If, and COUNTIF) with example and downloadable excel sheet. You can learn more from the following articles –