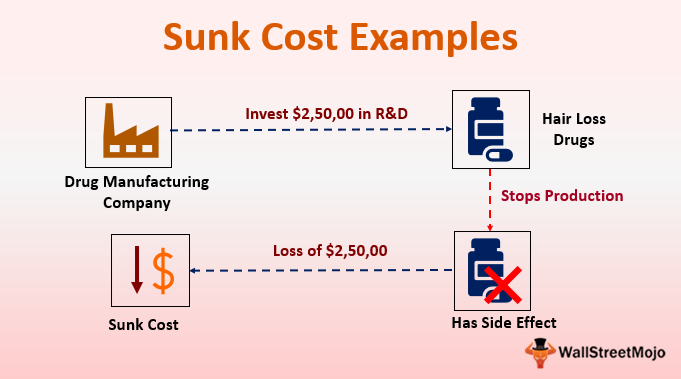 A drug manufacturing company A invests $ 2,50,000/- for many years for the R&D on a new drug for hair growth. When the company launched this product in the market, due to some side effects faced by many patients, doctors stopped recommended that pill to their patients. This issue forced the company to stop the production of that pill. In this case, $ 2,50,000/- has become a sunk cost, so it should not be considered in any decision for this product in the future.

Let’s consider the example of Company A, which is into two-wheeler manufacturing and have a vast product line in their portfolio. Recently, the Company has launched one new two-wheeler model, and the board has decided to spend $5,00,000 on marketing and advertisement to promote its new product. Although they have not succeeded in this marketing campaign as the product efficiency was not up to the mark.

The company has already spent $5,00,000 on this failed marketing campaign. Still, they should not consider this expense in any future decision making for the same product or any other product of the company. This amount will be regarded as a Sunk cost.

Cost for equipment’s whether small or big production machinery, tends to become sunk cost over time. Most of the manufacturing companies would have a vast product line in their portfolio, and most of them are not similar. Companies have to invest in different kinds of machinery for different products. Not a single machine can produce all types of products. Sometimes, most of the old machinery or the products which they manufacture are not at all in fashion at present. Companies have to replace that machinery with new upgraded machinery.

In this case, companies can resell the machinery, but in no case, they can recover the whole amount which was spent initially. So, the amount which is not recoverable would be considered as Sunk Cost.

A Company XYZ is into the manufacturing of kid toys. They manufacture different kinds of small or big size toys, soft toys, and automatic toys. They initially spent $ 1,00,000 on purchasing equipment and machinery for their manufacturing plant. Over time, due to the change in the toy industry, the company needed advance kind of machinery, and the board has decided to replace old machinery with a new one. The company has sold old machinery at $ 20,000 as scrap, and the remaining $80,000 became sunk cost in the case. They should not consider that amount which was spent on old machinery, for any kind of future decisions,

Whether it’s a small firm or big firm, manufacturing industry, or service industry, all have payroll expenses in the books. Payroll Accounting Expenses include salaries, employees’ benefits, expenses on employee training, which would become sunk cost always once the amount paid in payroll head.

The amount which is already spent on employees, directly or indirectly, cannot be recovered. It does not affect the performance of employee performance or behavior in the organization.

For example, A company spent $ 10,000 to train its staff for the use of its newly introduced ERP system. Initially, it was working as per the plan. Still, after few months due to changes in office culture, the ERP system was found unreliable and unproductive due to that the company wanted to replace the ERP system and had to train its employees again for the use of a new ERP system. In the first case, the training expenses $10,000 would be considered as sunk cost as it was the expense which would not be recovered in the future and not at all useful in any kind of future business activity.

A sunk cost is also called a Past Cost, which does not affect the present business situation. Any money spent on any project should be considered as an individual project cost. We can conclude the above decision in the following points,

This article has been a guide to Sunk Cost Examples. Here we discuss the top 4 practical examples of sunk cost along with a detailed explanation. You can learn more about budgeting from the following articles –