Internal rate of return (IRR) is the discount rate that sets the net present value of all future cash flow from a project to zero. It is commonly used to compare and select the best project, wherein, a project with an IRR over an above the minimum acceptable return (hurdle rate) is selected.

Here is the Formula

Also, have a look at the differences between NPV and IRR.

Let us assume that Nick invests $1,000 in a project A and gets a return of $1400 in 1 year. Calculate Internal Rate of Return of project A?

Below is the Net present value calculation table of the project with different discount rates (cost of capital). 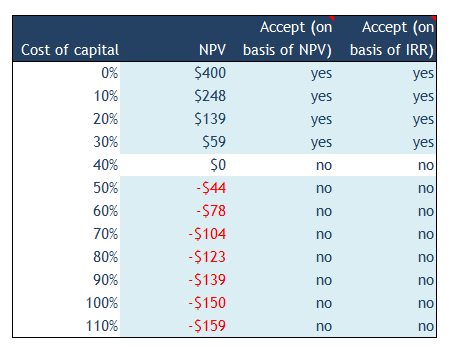 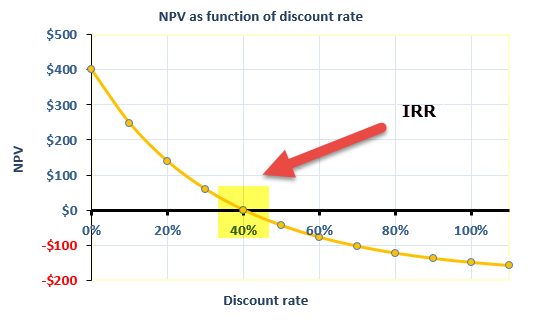 Internal Rate of Return in Excel

Step 1 – Cash inflows and outflows in a standard format 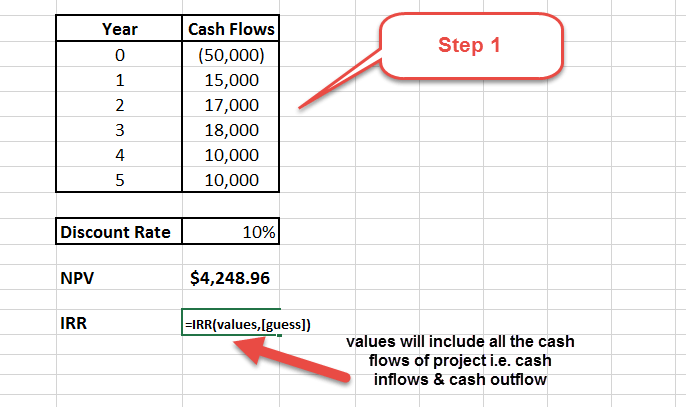 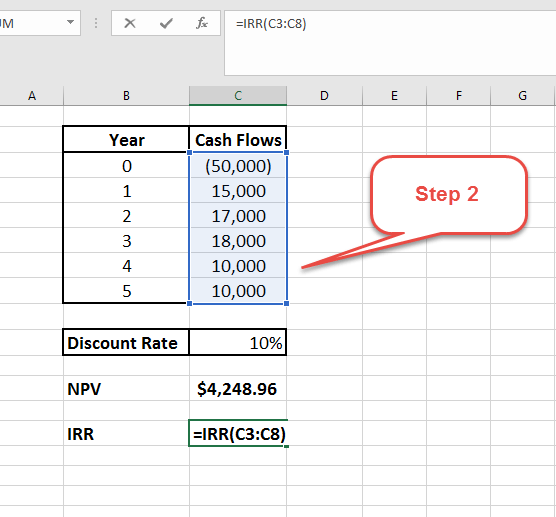 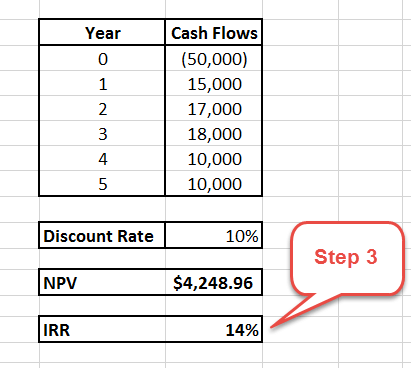 What is the significance of IRR?

Internal Rate of Return is much more useful when it is used to carry out a comparative analysis rather than in isolation as one single value. The higher a project’s Internal Rate of the Return value, the more desirable it is to undertake that project as the best available investment option. IRR is uniform for investments of varied sorts and, as such, IRR values are often used to rank multiple prospective investment options that a firm is considering on a comparatively even basis. Assuming the amount of investment is equal among the different available options of investment, the project with the highest IRR value is considered as the best, and that particular option is (theoretically) taken up first by an investor.

The IRR of any project is calculated by keeping the following three assumptions in mind:

The IRR value provides the organization with a rate of growth that can be expected to be obtained by making an investment in the project considered. While the actual Internal Rate of Return obtained may vary from the theoretical value that we have calculated, the highest value will surely provide the best growth rate among all. The most common use of the Internal Rate of Return is seen when an organization uses it to consider investing in a new project or increase the investment in a currently ongoing project. As an example, we can take the case of an energy company that opts to start a new plant or to expand the working of a current working plant. The decision, in this case, can be taken by calculating IRR and thus finding out which of the options will provide a higher net profit.

The hurdle rate or required rate of return is a minimum return expected by an organization on the investment they are making. Most organizations keep a hurdle rate, and any project with an Internal Rate of Return exceeding the hurdle rate is considered profitable. Although this is not the only basis of considering a project for investment, the Hurdle rate is an effective mechanism in screening out projects which will not be profitable or profitable enough. Usually, a project with the highest difference between the Hurdle rate and IRR is considered the best project to invest.

There are few thumb rules to be followed while any IRR calculations are done. They are:

It can even be compared to the prevailing rates of return within the securities market. If a firm cannot notice any investment options with Internal Rate of Return values more than the returns which will be generated within the monetary markets, it may merely opt to invest its retained earnings into the market. Even though the Internal Rate of Return is considered a standalone metric with great importance, it should always be used in conjunction with NPV for getting a clearer picture of a project’s potential in earning the organization a better profit.

These drawbacks of multiple Internal Rate of Return occurrences and the inability to handle multiple duration projects have brought up the need for a better procedure to find out the best project to invest. And so, a new modified metric known as the modified internal rate of return or in short MIRR is designed.

This article is a guide to what is Internal Rate of Return (IRR) and its definition. Here we also discuss the formula to IRR. You may also have a look at the following articles on Corporate Finance –