Sunk costs are all those costs which have been incurred by the company in the past time with no chance of its recovery in the future and are not considered while taking any of the decision as these costs will not change regardless of any outcome of the decision.

In simple words, A sunk cost is an expense that has already been done and cannot be recovered. It is also known as stranded cost or retrospective costs or unrecoverable expenses. When such costs are higher, it creates a wall to the entry of new firms since they risk huge losses if the companies decide to leave the market. Since these kinds of costs cannot be recovered or regained, they shouldn’t be considered while making rational decisions. 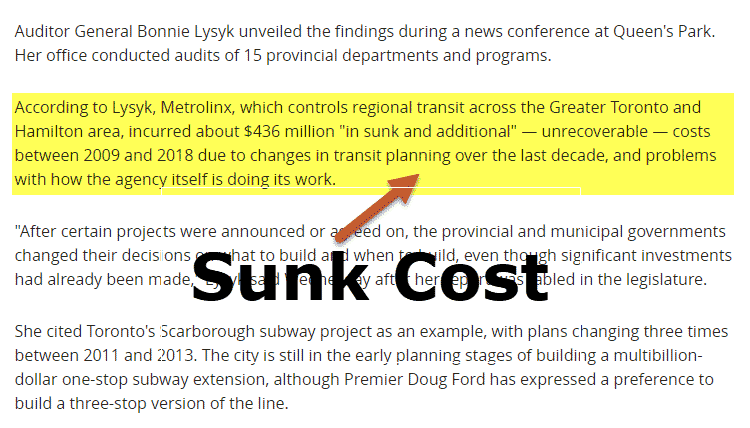 Let us discuss a few examples of sunk costs and how to interpret the same.

What is Sunk Cost Fallacy?

Sunk cost fallacy happens when a business decides to continue its spending because of the pet decisions involved like time, money, and resources instead of taking a rational decision and following choices that will maximize the returns at that time.

Every organization faces the dilemma of sunk cost while decision making at some point. These costs cannot be avoided at any cost. Since these costs are in the past, companies should not keep pouring money in these losses. Instead, companies must focus on the current market and ignore the previously spent costs. If there is no potential, then they should stop investing and end the operations. We all don’t like losing money, but letting go of the past in these situations can help in avoiding more losses in the future.

This article has been a guide to what is Sunk Cost and its definition. Also, we discuss the meaning of Sunk costs Fallacy and how this happens when a business decides to continue spending on its pet projects. You may learn more about accounting from the following articles –