Wildcard characters special characters that are used to find the result, which is less than exact or accurate.

For example, if you have the word “Simple Chat,” and in the database, you have “Simply Chat,” then the common letter in these two words is “Chat,” so using excel wildcard characters, we can match these. 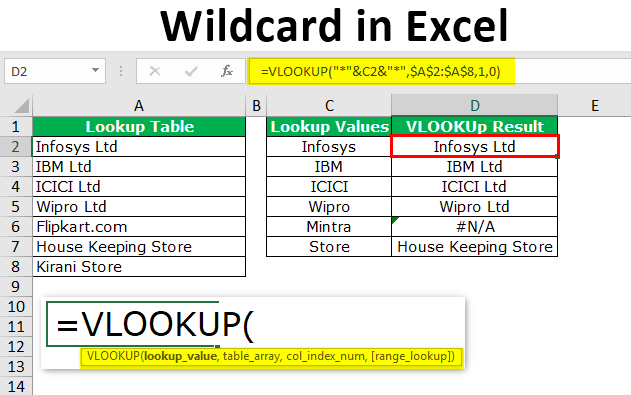 There are three types of wildcard characters in excel.

This is to match zero or the number of characters. For example, “Fi*” could match “Final, Fitting, Fill, Finch, and Fiasco,” etc.…

This is used to match wildcard characters in the word. For example, if you have the word “Hello*” to find this word, we need to frame the sentence as “Hello~*,” so here, the character tilde (~) specifies the word “Hello” as it is not followed by the wild card character.

As we discussed, an asterisk is used to match any number of characters in the sentence.

For example, look at the below data. 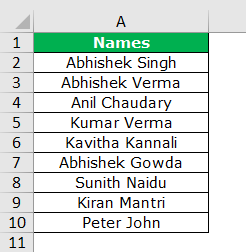 In the above data, we have names, with these names, we have many names which have the common word “Abhishek.” So by using wildcard asterisk, we can count all the “Abhishek” here.

Open the COUNTIF function and select the range. 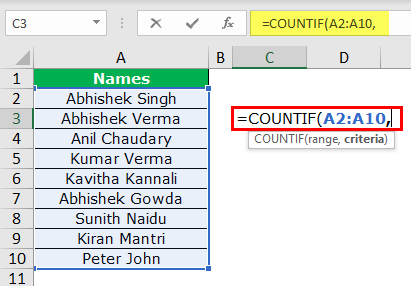 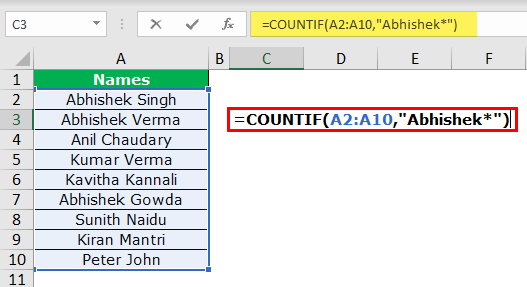 That’s all this will count all the word which has “Abhishek” in it. 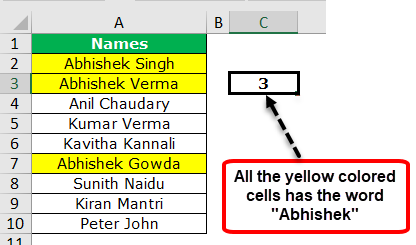 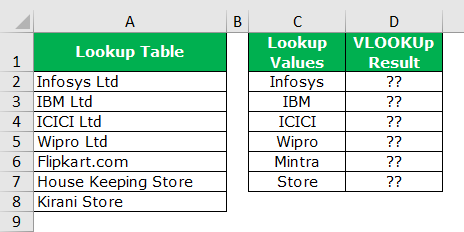 We have a Lookup Table in column A. In column C, we have lookup values. These lookup values are not exactly the same as the lookup table values. So we will see how to apply VLOOKUP using wild cards.

First, open the VLOOKUP function in the D1 cell.

Here we have applied two asterisk characters “*”&C2&”*.” Here asterisk indicates anything in between the wildcard should be matched and return the related result.

Even though we had just “Infosys” asterisk character matched the value in the lookup table and returned the exact result as “Infosys Ltd.”

Similarly, in cell D6, we got the error value as #VALUE! Because there is no word “Mintra” in the lookup table.

As we discussed, the question mark can match a single character in the specified slot. For example, look at the below data. 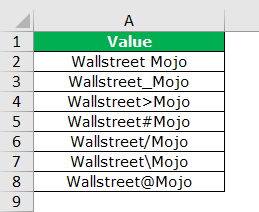 In the above data, our ideal value should be “Wallstreet Mojo,” but we have several special characters in between. So we will use the question mark to replace all of those.

Click on Replace All. We will get the below result. 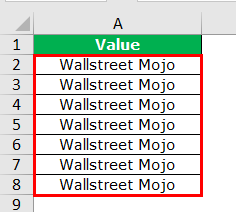 Here all the trick is done by excel wildcard character question mark (?). Let us take a look at what we have mentioned.

Like this, by using wildcard characters, we can match partial data and get the job done.

This has been a guide to Wildcard in Excel. Here we discuss the 3 different types of wildcard characters – Asterisk (*), Question Mark(?) & Tilde(~) in excel along with examples and a downloadable excel template. You may also look at these useful functions in excel –