What is A Priori Probability?

The term “a priori” is Latin for the words “presumptive” or “deductive.” So, as the name suggests, it is more deductive and is not at all influenced by what has happened in the past. In other words, the underlying principle of a priori probability follows logic rather than history to determine the probability of a future event. Typically, the outcome of a classical probability is calculated by evaluating the pre-existing information or circumstance associated with a situation in a rational way. As already mentioned above, in such a probability estimation, each event is independent, and their previous events impact their occurrence in no way.

The formula is expressed by dividing the number of desired outcomes by the total number of outcomes. Mathematically, it is represented as below,

A Priori Probability Formula = No. of Desired Outcomes / Total No. of Outcomes

It should be noted that the above formula can only be used in the case of events wherein all the outcomes equally likely to occur and are mutually exclusive.

Below are examples to understand the concept in a better manner.

Now, the probability of rolling a 1 or 5 in fair dice roll can be calculated by using the above formula as, 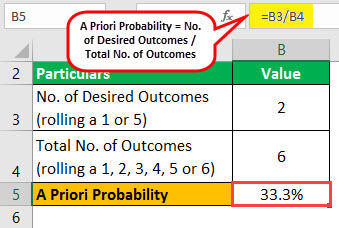 Let us take the example of a standard 52-card deck to illustrate the concept. There are 52 cards equally distributed among four suits (13 ranks in each suit) in a typical 52- card deck. If one draws one card and places it back in the deck, then determine it to draw a card from the hearts suit?

Now, the a priori probability of drawing a card from hearts suit can be calculated by using the above formula as, 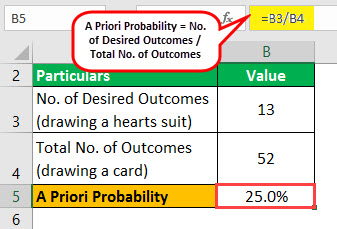 Therefore, the probability of drawing a card from a heart suit from a standard deck is 25.0%.

Let us take the example of a coin toss to illustrate the concept. A coin has two sides – a head and a tail. Determine the a priori probability to land a head in a usual coin toss.

Now, the probability of landing a head in a coin toss can be calculated by using the above formula as, 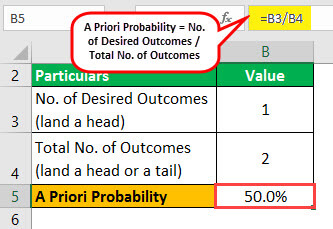 Some of the major advantages are as follows:

Some of the major drawbacks are as follows –

So, it can be seen that a priori probability is an essential statistical technique that also extends to other concepts. However, it has its own set of limitations that one needs to take cognizance of while drawing statistical insights.

This article has been a guide to what is A Priori Probability and its definition. Here we discuss formula to calculate a priori probability with examples and advantages, drawbacks, and differences. You can learn more about from the following articles –