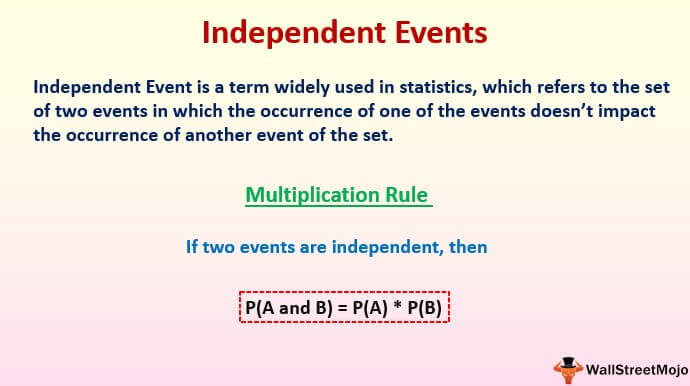 There is a multiplication rule in probability which can be tested upon to identify whether the two events are independent or not.

Multiplication rules state that, if two events are independent, then:

Further, there is one more observation that is true for such events.

The above equation suggests that if events A and B are independent, the probability of both the events occurring is equivalent to the product of their individual probabilities.

In the terminology of probability, two events can be said to independent if the outcome of one event is not decisive of the probability of occurrence or non-occurrence of another event.

Following is the calculation of probability for any event –

For example, let us calculate the probability of getting 6 on the dice when we roll it. Here, the total number of outcomes is six (numbers 1,2,3,4,5 and 6), and a number of favorable outcomes are one (number 6). Hence, probability comes out to be 0.16.

This article has been a guide to Independent Events and its definition. Here we discuss examples, rules of independent events along with its role in probability and differences. You may learn more about financing from the following articles –