The formula to calculate T distribution (which is also popularly known as Student’s T Distribution) is shown as Subtracting the population mean (mean of second sample) from the sample mean ( mean of first sample) that is [ x-bar – μ ] which is then divided by the standard deviation of means which is initially Divided by the square root of n which is the number of units in that sample[ s ÷ √(n)].

Consider the following variables are given to you: 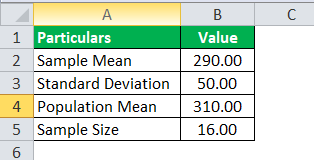 So, the calculation of T distribution can be done as follows-

Here all the values are given. We just need to incorporate the values.

We can use the t distribution formula 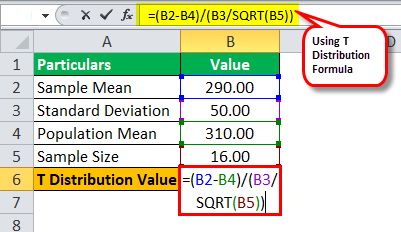 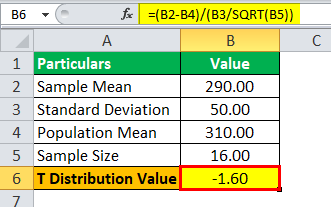 SRH company claims that its employees at the analyst level earn an average of $500 per hour. A sample of 30 employees at the analyst level is selected, and their average earnings per hour were $450, with a sample deviation of $30. And assuming their claim to be true, calculate the t -distribution value, which shall be used to find the probability for t – distribution. 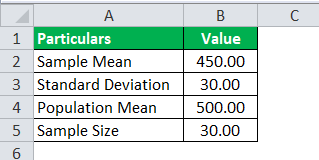 So, the calculation of T distribution can be done as follows-

Here all the values are given; we just need to incorporate the values.

We can use the t distribution formula 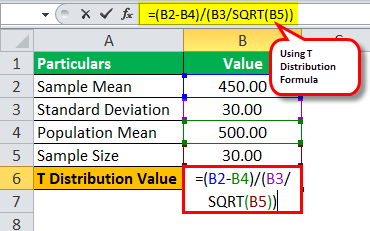 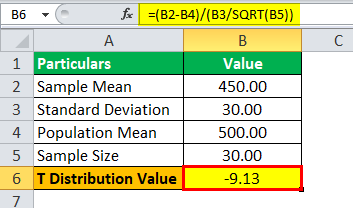 Universal college board had administered an IQ level test to 50 randomly selected professors. And the result they found from that was the average IQ level score was 120 with a variance of 121. Assume that the t score is 2.407. What is the population mean for this test, which would justify t score value as 2.407? 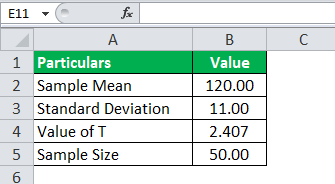 Here all the values are given along with t value; we need to calculate the population mean instead of t value this time.

Again, we would use the available data and will calculate the population means by inserting the values given in the formula below.

The sample mean is 120, the population means is unknown, the sample standard deviation will be the square root of the variance, which would be 11, and the sample size is 50.

So, the calculation of population mean(μ) can be done as follows-

We can use the t distribution formula. 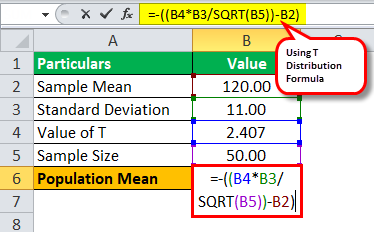 Population Mean (μ) will be – 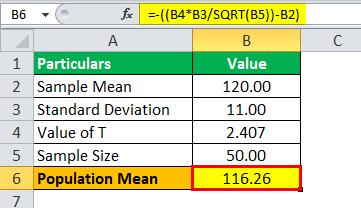 Hence the value for the population mean will be 116.26

The T Distribution (and those associated t scores values) is used in hypothesis testing when one needs to find out if one should reject or accept the null hypothesis. 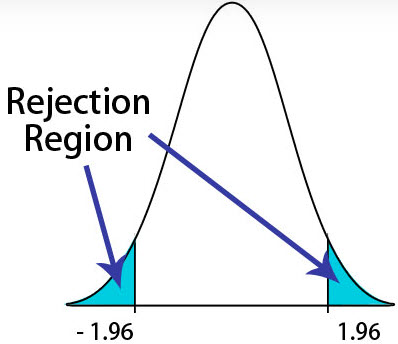 In the above graph, the central region will be the acceptance area, and the tail region will be the rejection region. In this graph, which is a 2 tailed test, the blue shaded will be the rejection region. The area in the tail region can be described either with the t-scores or with the z-scores. Take an example; the image in the left will depict an area in the tails of five percent (which is 2.5% on both sides). The z-score should be 1.96 (taking the value from the z-table), which shall represent that 1.96 standard deviations from the average or the mean. The null hypothesis can be rejected if the value of the z score is less than the value of -1.96, or the value of the z score is greater than 1.96.

In general, this distribution shall be used as described earlier when one has a smaller sample size (mostly under 30) or if one doesn’t know what the population variance or the population standard deviation is. For practical purposes (that is in the real world), this would be majorly always the case. If the size of the sample which is provided is large enough, then the 2 distributions will be practically similar.

This has been a guide to T Distribution Formula. Here we learn how to calculate Students T distribution value and population mean (μ) along with practical examples in excel and a downloadable excel template. You can learn more about excel modeling from the following articles –