Random numbers in excel are used when we want to randomize our data for a sample evaluation, these numbers generated are absolutely random, there are two inbuilt functions in excel which gives us random values in cells, =RAND() function gives us any value from range 0 to 1 whereas another random function =RANDBETWEEN() takes input from user for a random number range.

Many randomizing devices such as dice, shuffling playing cards, and roulette wheels seem to have been developed for use in games of chance. However, these cannot be used for digitized files. That is why we need to have tools for generating random numbers in excel.

How to Generate Random Numbers in Excel?

There is a number of methods to generate a random number in excel. We will discuss the two of them – Rand() and Randbetween() Functions

To generate a random number in excel between 0 and 1(excluding), we have RAND() function in Excel.

RAND() functions return a random decimal number that is equal to or greater than 0 but less than 1 (0 ≤ random number <1). RAND recalculates when a worksheet is opened or changed (Volatile Function).

RAND function returning the value between 0 and 1 (excluding).

We just need to type ‘=RAND()‘ in the cell and press Enter. The value will change every time when any change is made in the sheet.

How to Generate Random Numbers in Excel for more than One Cell?

If we want to generate random numbers in excel for more than one cell, then we need

How to Stop Recalculation of Random Numbers in Excel?

As RAND function recalculates, if any change in the sheet is made, we need to copy and then paste the formulas as values if we do not want values to be changed every time. For this, we need to paste the values of the RAND() function using Paste Special so that it would no longer be a result of the ‘RAND ()’ function and will not recalculate. 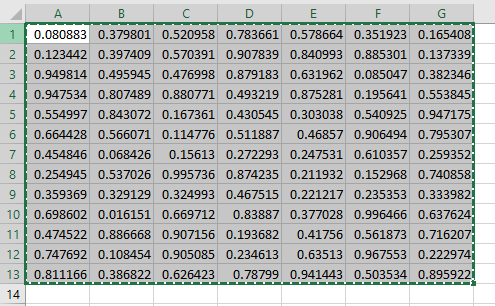 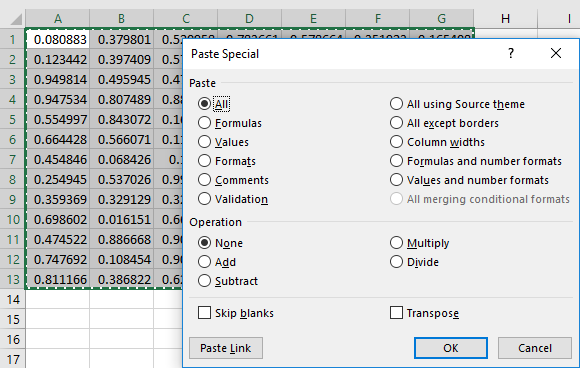 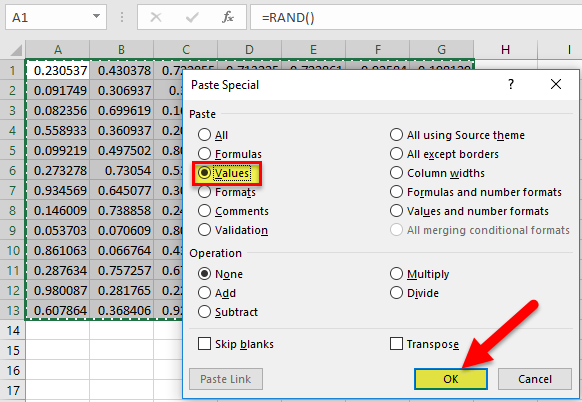 Now we can see, the value in the formula bar is the value itself, not the rand() function. Now, these are only values. 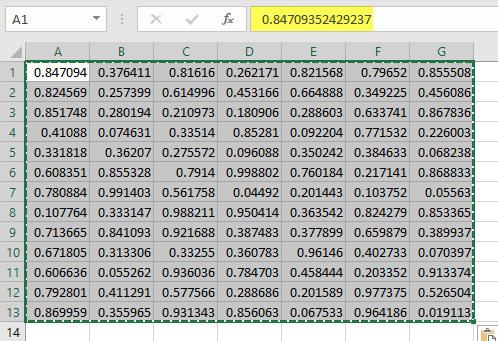 After pressing F9, we get the value only.

As RAND function returns a random decimal number between 0 and 1 only, if we want the value from a different range, then we can use the following function:

Let ‘a’ be the start point.

And ‘b’ be the endpoint

As the name of the function indicates, this function returns a random integer between given integers. Like RAND() function, this function also recalculates when a workbook is changed or opened (Volatile Function).

The formula of the RANDBETWEEN Function is:

Bottom: An integer representing the lower value of the range.

Top: An integer representing the lower value of the range.

To generate random numbers in excel for the students between 0 and 100, we will use the ‘RANDBETWEEN’ function.

First, we need to select the data, then type the formula, i.e., =RANDBETWEEN(0,100), and hit Cntrl + Enter. You can prefer the below-given screenshot.

As values will recalculate, we can use Alt+Ctrl+V to open the ‘Paste Special’ Dialog box to paste as Values only.

Like RAND() function, we can also use the method of typing the RANDBETWEEN function in the formula bar and pressing F9 to convert the result into value, and then press Enter.

We can use the RANDBETWEEN() function for getting random dates between two dates.

We will be using 2 dates as the bottom and top arguments.

We need to copy down the formula using the shortcut (Ctrl+D) after making the selection.

We can change Start (D1) and End Date (E1) to change the top and bottom values for the function.

To randomly choose head and tail, we can use the CHOOSE function in excel with the RANDBETWEEN function. 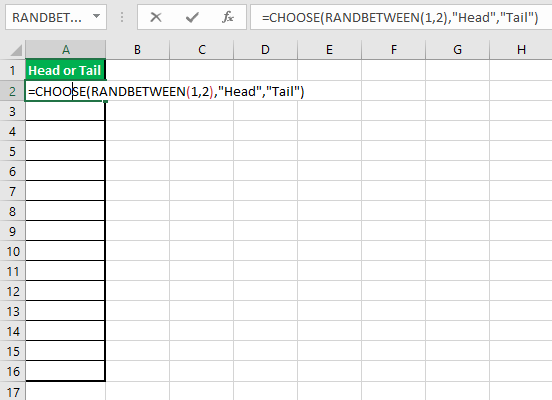 We just need to copy the formula into the next and next cell every time in the game, and ‘Head’ and ‘Tail’ will come randomly.

Many times, we have to imagine and create data for various examples. Suppose we have data for sales, and we need to allocate three different regions to every transaction of sale.

Then we could use the RANDBETWEEN function with the CHOOSE function.

You can drag the same for the remaining cells. 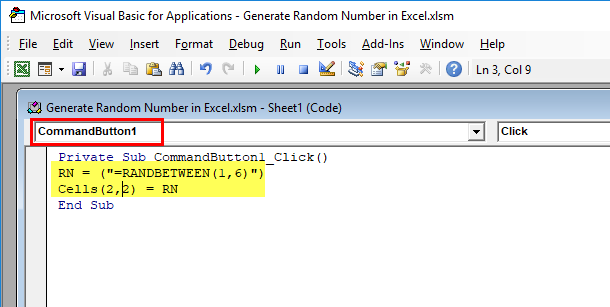 Save the file using the .xlsm extension as we have used the VBA code in the workbook. After coming to the Excel window, deactivate the ‘Design Mode.’

Now, whenever we click on the button, we get a random value between 1 and 6.

This has been a guide to Random Numbers in Excel. Here we discuss how to generate random numbers in excel using RAND() and RANDBETWEEN function along with multiple projects and downloadable excel templates. You may also look at these useful functions in excel