Running Total in Excel is also called as “Cumulative” which means it is the summation of numbers increasing or growing in quantity, degree or force by successive additions. It is the total which gets updated when there is a new entry in the data, in excel the normal function to calculate the total is sum function, so if we have to calculate the running total to see how the data changes with every new entry then that means the first row reference will be absolute while others change and that is the method of calculating running total in excel. 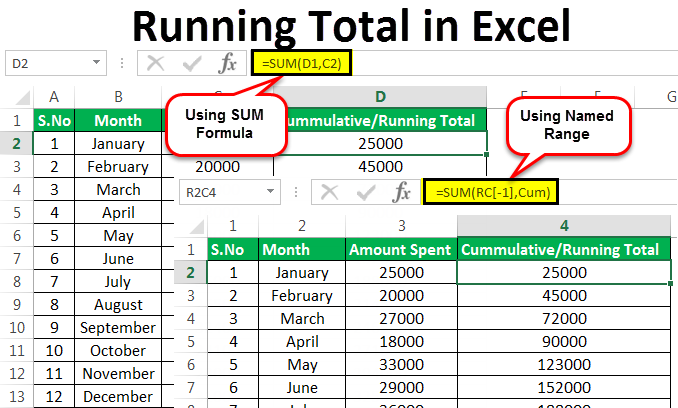 How to Calculate Running Total (Cumulative Sum) in Excel?

Let’s assume that we have the data on our expenses on a monthly basis as follows: 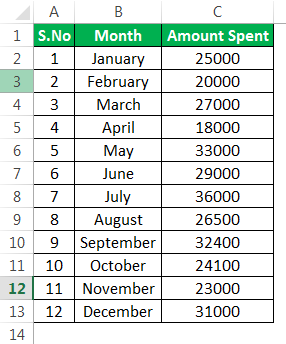 From this data, we can observe that we spent 3,25,000 in total from January to December. 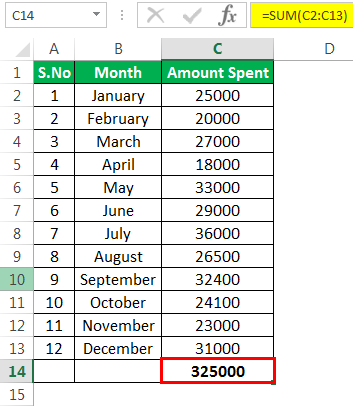 Now, Let’s see how much of my total expenses were made by the end of the months. We are going to use a simple formula in excel to make the calculation as required. 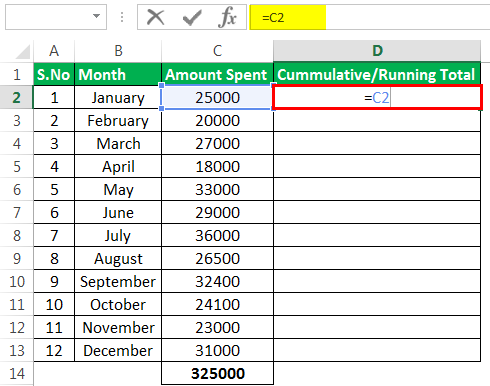 First, we should consider the amount spent in a particular month, i.e., January, as we are considering our spent calculation from the month of January. 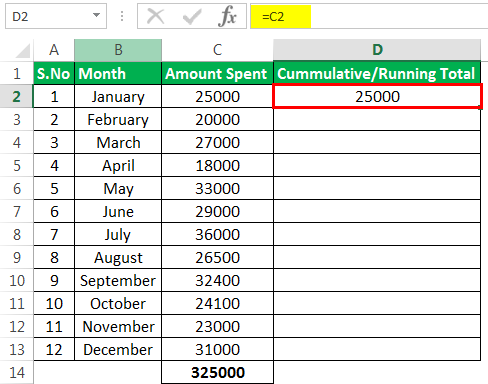 Now, calculate the money spent for the rest of the months as follows: 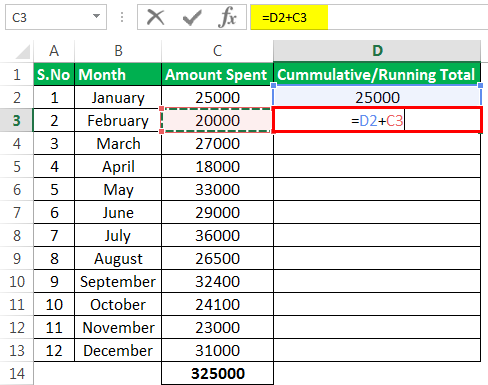 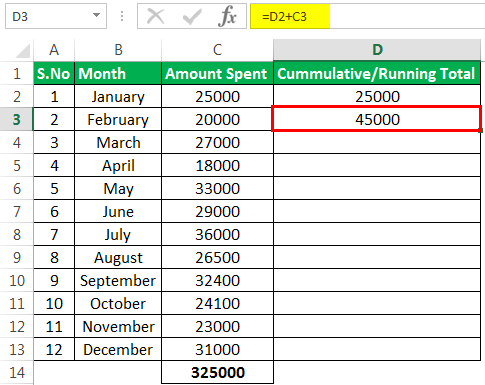 For the next month onwards we have to consider the money spent till the previous month and money spent in the current month. i.e.

Similarly, for the rest of the months, and the result would be as follows:

From the above result, we can observe that by the end of the year, i.e., December, we had spent 3,25,000, which is the total spent amount from the starting of the year. This running total will tell us how much we had spent on a particular month. 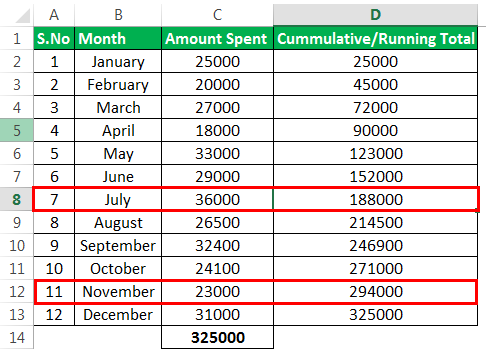 We can also use this data (running total) for certain analyses. 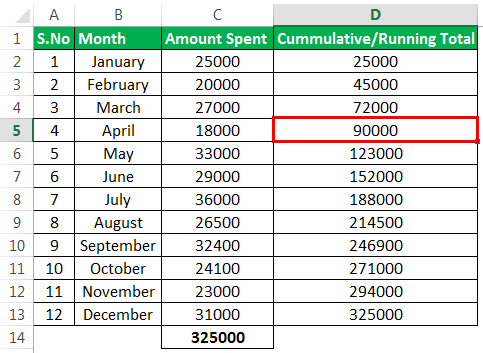 Q2) Suppose if we want to know the % of money spent that we had spent till July? 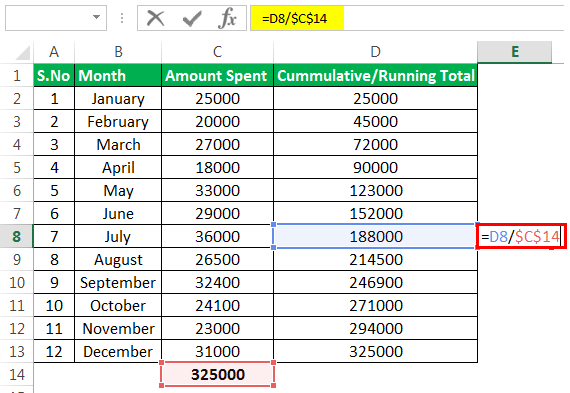 We had spent 58% of the money until July. 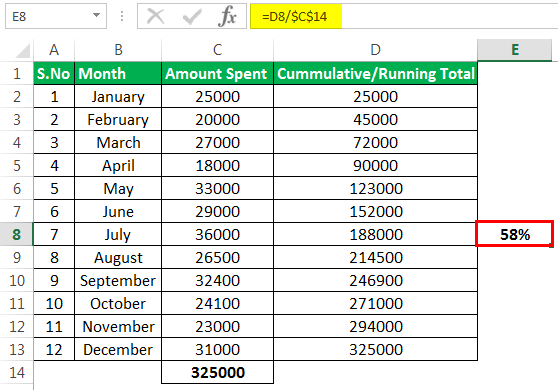 In this example, we will use the SUM in excel instead of the “+” operator to calculate the cumulative in Excel. 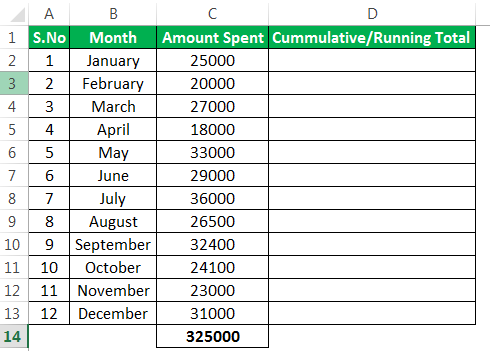 Apply the SUM Formula in excel. 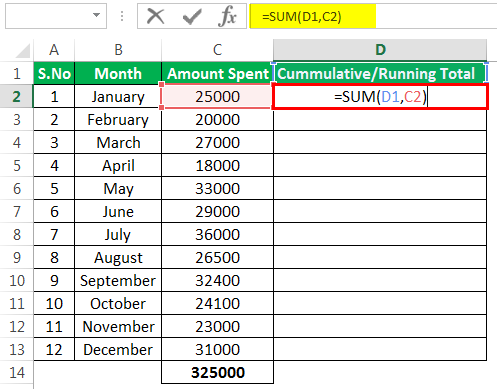 While using the SUM function, we should consider summing the earlier month spent and a current month spent. But for the first month, we should add earlier cells, i.e., Cumulative, which will be considered as zero. 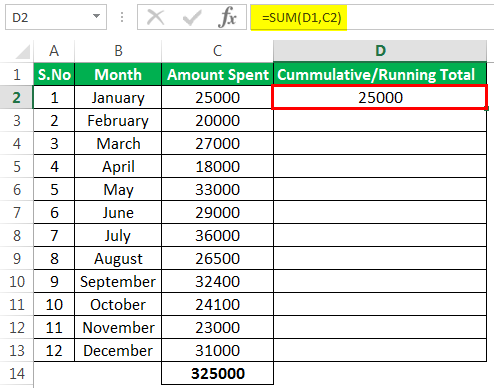 Then drag the formula to other cells.

Example #3 – Performing “Running Total or Cumulative” with a Pivot Table

In order to create a running total value, again drag the “Amount spent” column into the values field. Then right-click on the column as follows:

Click on “Show Value As,” and you will get an option of “Running Total As” and click on that. 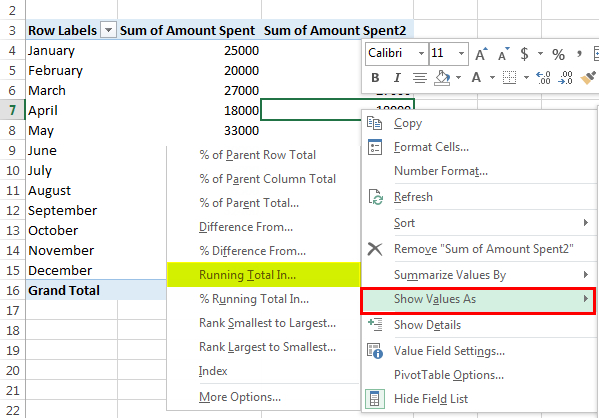 Now you can see the table with a column having cumulative values as follows: 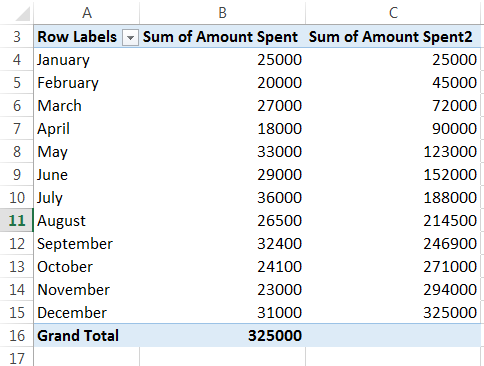 We can change the name of the table by editing the cell that has a Sum of Amount Spent2.

In order to perform running total with a relative named range, we need to do some temporary changes in the excel options.

Change Excel reference style from A1 to R1C1 from excel options as below: 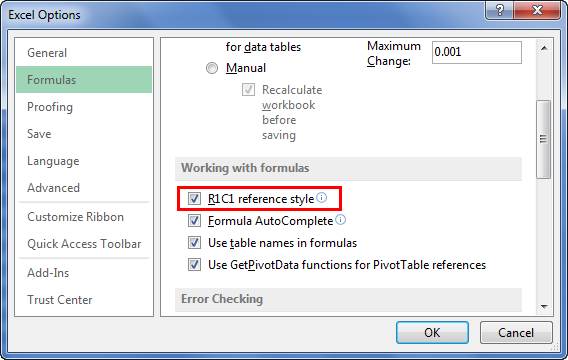 Reference style R1C1 refers to Row 1 and Column 1. In this style, we can find a positive and negative sign which is used for a reason.

In order to use the reference style to calculate the running total, we have to define a name with certain criteria.

In our example, we have to define name by “R[-1]C” because we are calculating the cumulative, which is the sum of the previous row of the cell and column with every individual month expense. Define a name in excel with “Cum”(You can define as per your wish) as follows:

Go to the Formulas tab and select the defined name.

Then New Name window will pop out and give the name as per your wish and give the condition that you want to perform for this particular name that you defined. Here we take R[-1]C because we are going to sum the previous row of the cell and column with every individual month expense. 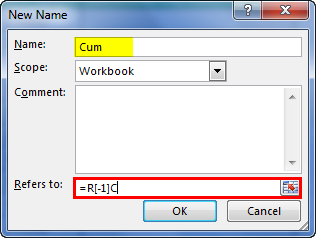 Once the name is defined, then go to the column of Cumulative/Running Total and use the defined name into SUM function as follows: 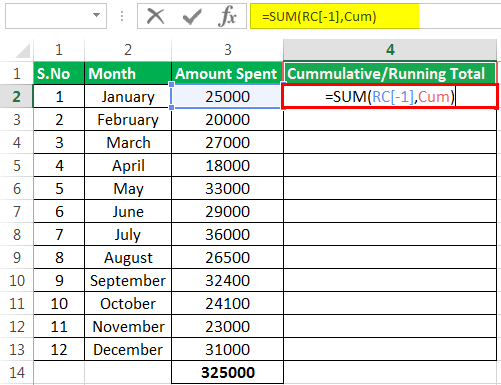 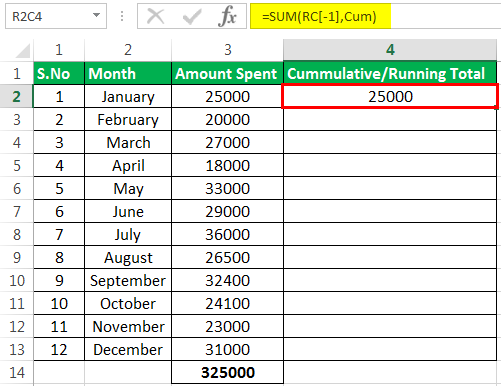 Then drag down the formula till the end of the table, and we can see the cumulative results will be out as below:

This has been a guide to Running Total in Excel. Here we discuss how to Calculate Running Total (cumulative sum) using Simple Formula, SUM Formula, Pivot Table, and Named Range in Excel along with practical examples and downloadable excel template. You may learn more about excel from the following articles –