What is Temporal Method?

According to FASB Rule number 52, you also apply the temporal rate method if the operations at your firm carry out in an exceedingly hyperinflationary environment. 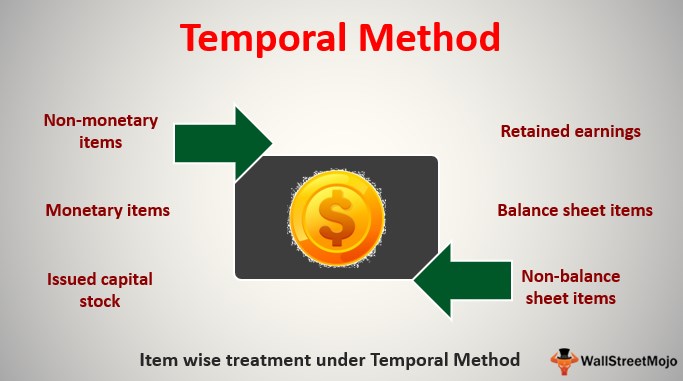 Now, ABC paid £ 2,600 for the acquisition of XYZ’s 70 % share capital. And for acquiring the reserves of XYZ, ABC had to pay down a sum equivalent to TJS 3,200 on the date of acquisition.

Now, the P/L statement of Company XYZ looks like the following:

Now, the following table shows which rate will apply to each of the above items as per the temporal method example and what will be the £ values of these items after applying these rates:

The temporal method applies the present rate of exchange to all the financial assets and liabilities (short-term as well as long-term).

The physical (non-financial) assets that are evaluated at past rates are translated at past rates. The different assets of an overseas subsidiary will, in all cases, be acquired through a very long period. Now, the exchange rates do not remain stable for such long periods. Hence, many different exchange rates are applied for translating these foreign assets into the multinational’s home currency.

However, the utilization of this method will result in changes in different financial ratios when the balance sheet is converted into the presentation currency because the assets and liabilities are affected in several ways.

As a result of the rapid globalization of markets and the company’s presence across the globe, the businesses are not dealing in just their native currencies. They need to deal with a variety of currencies and on a very regular basis. This is the reason why foreign currency translation became something that cannot be avoided. Thus, several methods are designed to ensure a consistent foreign currency translation; and the temporal method example is one among them.

The accounting standards incorporate foreign operations to use the temporal or historical rate method in cases where the native currency differs from the functional currency. Therefore, a subsidiary of a Canadian company with foreign operations in a small country where all business transpires in U.S. dollars, not the country’s native currency, would use the temporal rate method.

Once you apply the temporal rate method, you update income-generating assets on the balance sheet and profit-and-loss statement items, by using the historical exchange rates of transaction dates; or from the date that the organization last assessed the fair market price of the account. You acknowledge this adjustment as current earnings.

This article has been a guide to what is Temporal Method. Here we discuss temporal method examples along with its applications, advantages, and disadvantages. You can learn more about accounting from the following articles –