What is High Water Mark?

A high watermark in hedging means the level of or peak of the value of an investment has achieved since its establishment which is useful for measuring incentives of the fund managers and as a protection for the investors, however, a too high watermark may discourage the employees which may be a hurdle in achieving specified objectives.

Hedge Funds usually have a fee structure that includes Performance Fees, which is typically 20% of the profits generated by the fund. But the manager will get a share in profits only when the returns cross the High-Water Mark value. 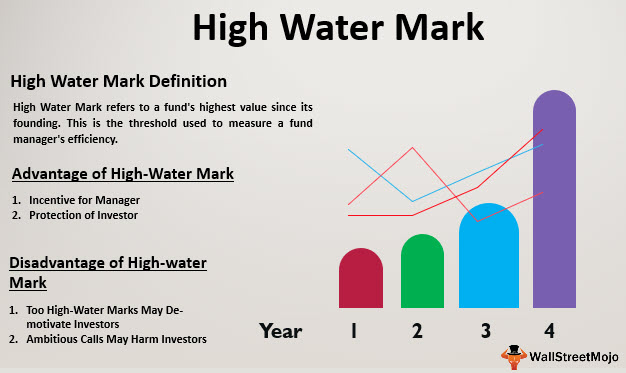 Suppose a fund starts with $100 Million of capital. In the first year, the fund realizes a 25% return, and the value increases to $125 Million. Now, this peak value is the High Water Mark. In any year that the value of the fund is less than $125 Million, the manager does not get any performance fees.

Wealth creators LLC started a hedge fund with an initial capital of $500 Million. The fee structure of this fund is 2/20, which means it charges 2% Management Fees and 20% Performance Fees. The manager of the fund is Adam Borges.

Here are the details of the fees earned by WealthCreators LLC for each of the four years:

In the first year, the managers get the management fees plus the 20% performance fees on the $150 Mn profit generated. The HWM is now $650 Million.

In the second year, since the fund has decreased in value, the total fees are only 2% management fees.

In the third year, even though the fund generated profit relative to the previous year, it does not get any performance fees since it has not yet crossed the HWM of $650 Million.

High Water Mark refers to the highest value that a fund has reached since its inception and is used as a threshold to measure the performance of a fund manager.

Every time the value of a fund crosses the maximum amount it has previously reached throughout its life, the high water mark changes to the new peak value. It is an essential concept and commonly seen in investments such as hedge funds, PE funds, etc.

A High Water Mark is an essential concept in the world of hedge funds. It protects the investors and motivates the manager to perform well. It is a more strict measure than the hurdle rate. But at the same time, it might cause the manager to take very risky bets and harm the investors.

This has been a guide to what is High Water Mark? Here we discuss examples of high water mark (HWM) in Hedge fund along with its advantages and disadvantages. You can learn more about asset management from the following articles –