The omega ratio is a weighted risk-return ratio for a given level of expected return that helps us to identify the chances of winning in comparison to loosing (higher the better). It also considers the third and fourth momentum effect i.e., skewness & Kurtosis, which gives this an immense usefulness in comparison to others.

For calculating the omega ratio, we require the cumulative excess return of the Asset. Basically, we need to calculate all the high and low in a cumulative manner.

The formula of Omega Ratio

In simple form, the omega ratio formula can be understood as follows

Return Earned in Past 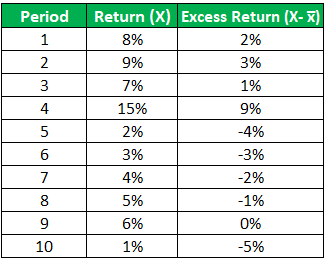 There are various measures that are used by the organization to check their risk in comparison to risk undertaken. As per the term structure theory of Fixed income, people are willing to take the risk if they are compensated in the form of higher returns. The higher return should be support by the higher risk, but there should be a trade-off so that higher returns can actually be seen after adjusting on a risk-adjusted basis.

Any ratio used to check the performance should be used in conjunction with another ratio, not in isolation.

The following are different measures of the omega ratio.

The omega ratio is useful in choosing the portfolio as per the desired profile of the investor. Some investors (Risk-averse people) want that they should at least earn the minimum rate of return that is saving rate provided by the bank, or even more risk-averse people want that at least their capital should not be at risk. One can check their risk tolerance level and risk appetite ability to choose low or high omega ratio to align; they require a risk-return profile with the particular class.

This has been a guide to what is Omega Ratio and its definition. Here we discuss formula to calculate the omega ratio along with its example, benefits, and limitations. You can learn more about budgeting from the following articles –