What is Accrued Revenue?

Accrued Revenues is the revenue that the company has earned in the ordinary course of business after selling the good or after the provision of the services to the third party but the payment for which has been not been received and is shown as an asset in the balance sheet of the company.

It is a part of the sale which has been recognized by the seller, however not yet billed to the customer. This concept is mostly used in businesses where revenue recognition is delayed for an unreasonable longer period.

Accrued service revenue is a very common concept in the industries where billings to customers are delayed for several months till a designated millstone is reached (in terms of percentage completion) or till the end of the project. It is much less commonly used in manufacturing businesses where invoices are usually issued as soon as products are shipped.

Under generally accepted accounting principles (GAAP), it is recognized when the company satisfies a performance obligation that is a sale that has occurred and is finalized.

As we note from the above image, Redfin Corporation reported such revenue of $12.09 million in March’18 Quarter and $13.3 million in December ’17 quarter. 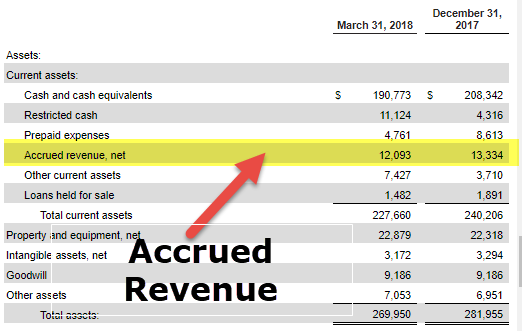 Accrued Revenue is shown as an asset on the balance sheet, but it’s not always as valuable an asset as liquid cash. It is because it takes effort related to billing and collection from the customer to convert it into cash. Having large amounts of accrued revenue can adversely impact the working capital cycle. It can be a sign that a company isn’t efficient in getting its customers to pay for its services.

This concept is required to match revenues with expenses properly. The absence of such revenue may result in presenting excessively low initial revenue and low profits levels for a business, which does not indicate the true picture of the entity. Also, not using such revenue may results in lumpier revenue and profit recognition as revenues are only be recorded when invoices are issued, which happens typically after longer intervals.

#2 – Recording in the Financial Statements

It includes items that do not appear in the general ledger at the end of the reporting period. When a company records accrued service revenue, the other party will record an accrued expense for the particular transaction and is a liability on the balance sheet. Since such revenues are not yet in the company’s general ledger, they will not appear on the company financial statements unless an adjusting journal entry is recorded before preparing the financial statements.

If a transaction meets all of the revenue recognition criteria, the company can recognize revenue in its book as and when it delivers the product or service to its customers. Dubbed the percentage of completion method, this method of revenue recognition is often used by entities engaged in long-term projects. Thus such entities recognize revenue and calculate their revenue margin as they complete units of a product. For example, say that Company X bills Company Y only once a year for a long-term infrastructure construction project. Company X can accrue revenue relative to each milestone built every month.

Instead of accruing revenue as they incur costs, some companies set certain project-related milestones to accrue revenue. For example, say Company B is building five airplanes for Company C. As per the consulting agreement, Company B identifies the completion of each airplane as a project milestone and will only recognize revenue after every milestone. In this case, Company B can accrue revenue after it completes construction on each airplane, even if it only bills Company C once a year.

XYZ International is having a consulting project with one of its large clients, under which the agreement delineates two milestones for billing, after each of which the client owes $60,000 to XYZ. As the agreement is such that it only allows for billing at the end of the project for $120,000. XYZ must create below is the accrued revenue journal entry to record reaching the first milestone:

At the end of another two months, XYZ completes the second milestone and bills the client for $120,000. XYZ records the following is the journal entry to reverse the initial accrual, and after that records the second entry for the $120,000 invoice:

Debit balances related to accrued billings account are recorded on the balance sheet, while the consulting revenue change account appears in the income statement.

The reverse of deferred revenue, i.e., accrued service revenue, can also arise when customers pay in advance, but the seller has not provided services or shipped goods to date. In that case, the seller initially records a liability for the received payment and later realize the sales related to the same when the transaction is completed.

This article has been a guide to What is Accrued Revenue and its definition? Here we discuss why accrued revenue in the balance sheet is classified as assets along with a detailed explanation. You may have a look at these recommended articles below to learn more about accounting –