What is Credit Balance?

In accounting, the credit balance refers to the excess of the credit side of a ledger over the debit side. As per the fundamental accounting principles, ledgers accounts of liabilities, Incomes, Capital, Reserves, Provision, and Contra Expense tend to have a credit balance. 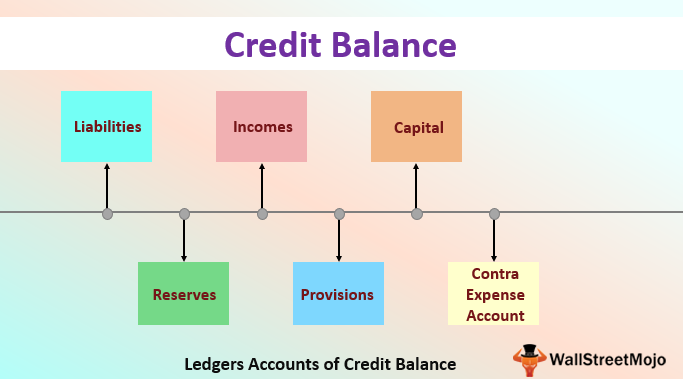 Liabilities are the dues arise from business transactions that the entity is obliged to honor.  Liabilities account include:

The golden rule of bookkeeping that applies to personal accounts requires to debit the receiver, credit the giver. Since most of the liability accounts are like personal accounts (accounts that pertain to individuals, firms, and corporates) by the said rule, they are recorded as a credit balance in the ledger account to indicate that amount owed by the entity.

ABC Inc. bought merchandise on 60 days’ credit from its suppliers. In this case, the supplier would have a credit balance in the books of ABC Inc., signifying the amount entity owed to its supplier.

Or, ABC Inc. raised long term funds by the issue of 6% 10-years bonds at par. In this scenario, ABC Inc. has raised funds from the public and is obligated to pay periodic interest payments as well as the repayment of principal at the end of 10 years. Hence the bondholders will have a credit balance in the books of ABC Inc.

Incomes refer to the revenue and gains arises during the business from the operating as well as non-operating activities of the entity. The fundamental bookkeeping rule requires to debit all the transactions like expenses and credit all the transactions like incomes and gains. By the said rule, all revenue nature accounts such as sales, interest income, commissions, and brokerage income, capital gains due to the sale of assets or investments have a credit balance.

Let us say ABC Inc. holds 300 shares of Z Inc. as an investment. By the end of the year, Z Inc. declared a dividend of US $ 3 per share. Now, the dividend received from Z Inc. is an income in the hands of ABC Inc., and it will be credited in the books of accounts of ABC Inc.

Capital represents the money invested in the business by the founders, promoters, or shareholders in the case of a company, partners in the case of firm and owner in case of proprietorship. Again, by the book-keeping rule about personal accounts, capital balance such as paid-up capital, capital accounts, minority interest account has a credit balance as in books keeping, the owner and the entity are considered two separate identities and these accounts represent the amount the organization owed to the shareholder at the time of liquidation of the entity.

Provisions refer to the amount set aside from the profits to meet out any uncertain economic obligations of the future. Provisions are general non-cash expenses, i.e., do not involve the cash outflow at the time of recording and thus have a credit balance as they represent an amount set aside to meet any dues or liabilities that may arise in the course of business.

A general example of provisions is the provisions made for taxes. At the time of finalizing the books of accounts, it is difficult for the business to determine the amount due for taxes as the calculation of taxable income involves auditor’s opinion in case of tax audits and consideration of certain allowed or disallowed deductions as per the tax laws. Thus, at the time of finalizing its books of accounts, entities set aside an amount from its profits as provision for income taxes. As the amount did not involve any cash outflow at the time of recording the transaction, it is considered a liability indicating a future obligation that may arise.

Contra Expense refers to the expense that set off a previous account of opposite nature.

For Example, ABC Inc. bought 100 units of t-shirts at the US $ 25 per t-shirt for the purpose of reselling the merchandise. To record this business transaction in the books of accounts, ABC Inc. debited the purchases account by the US $ 2,500, which indicates the cost of 100 t-shirts charged as an expense.

However, later the manager realized that 15 t-shirts were of inferior quality and immediately returned the same to the supplier. Now, in this case, it is important to reduce the total cost of 100 t-shirts by the cost of 15 t-shirts, which are returned as per the matching principle of accounting. Thus, ABC Inc. will credit the US $ 375 in the purchase return account to offset the amount debited in the purchase account. In this case, Purchase Return is a contra expense account and have a credit balance.

Credit balances in the books of accounts are generally referred to as the amount that the entity has earned as income or dues and liabilities which the entity is obligated to honor at the time of maturity.

This has been a guide to what is credit balance and its meaning. Here we discuss the top 6 ledgers accounts of credit balance like Liabilities, Incomes, Capital, Reserves, Provisions, Contra Expense Account along with the example. You can learn more about accounting from the following articles –