What is the Cash Ratio?

If we look at the graph below, we note that Starbucks has the highest cash ratio (0.468x in FY2016) as compared to Colgate and Procter & Gamble. But what does it mean by this ratio? Does it matter if this ratio of a company is more than 1? We will find out in this article.

The formula is as simple as it can be. Just divide cash & cash equivalents by current liabilities, and you would have your ratio.

But what cash equivalent really means?

According to GAAP, cash equivalents are investments and other assets which can be converted into cash within 90 days or less. Thus, they get included in the cash coverage ratio.

Current Liabilities are liabilities that are due in the next 12 months or less.

Let’s have a look at the cash & cash equivalents and current liabilities that any firm considers to include in their balance sheet.

Cash & Cash Equivalent: Under Cash, the firms include coins & paper money, undeposited receipts, checking accounts, and money order.  And under cash equivalent, the organizations take into account money market mutual funds, treasury securities, preferred stocks which have a maturity of 90 days or less, bank certificates of deposits, and commercial paper.

Even if it’s a useful ratio as it strips away all the uncertainties (receivables, inventories, etc. to turn into cash to pay off current liabilities) from current assets and focuses on only cash & cash equivalent, most of the financial analysts don’t use cash ratio to come to a conclusion about the firm’s liquidity position.

Now from the above example, we will be able to make some conclusions.

If we include current ratio to the perspective (current ratio = current assets / current liabilities), Company Y is in a better position to pay off short-term debt (if we consider that account receivables and inventories could be turned into cash within a short period of time) as its current ratio is 0.81.

Even if Company X has more cash, they have lesser accounts receivables & inventories. From one perspective, it is a good position to be in as nothing is locked up, and the major part has been liquidated. But at the same time, more the cash ratio and less current ratio means (compared to Company Y); Company X could have better utilized the cash lying for asset generation. From this perspective, Company Y has better utilized its cash.

In this section, we will take an example from the industry so that you can understand how this ratio works.

Here we will take into account the raw data and will calculate this ratio for two consecutive years.

First, we will take into account the balance sheet data of Nestle.

source: Nestle Annual Report
If you look at the balance sheet, you would see that there are two sets of information that are important to us in terms of determining the cash ratio.

The first is the two-year data of cash & cash equivalent (see the highlighted yellow in the balance sheet above), and the second data, which is useful to us, is the total current liabilities for the year 2014 and 2015.

Now, we would determine this ratio by using the simple formula we have mentioned above.

If we compare the cash coverage ratio of these two years, we would see that in 2015, the ratio is lesser compared to 2014. The reason may be better utilization of cash in the generation of profits.

Let us now compare how Nestle’s cash coverage ratio is compared to its competitors – Hershey’s and Danone. 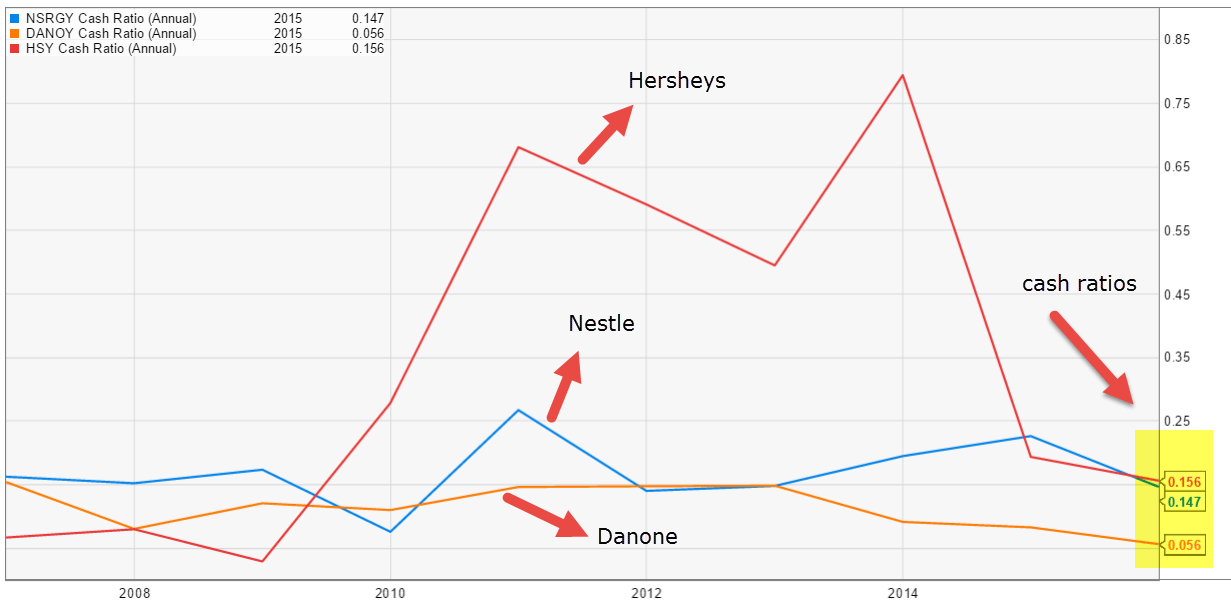 Let us now take another example of Colgate

source: ycharts
Colgate has been maintaining a healthy ratio of 0.1x to 0.28x in the past 10 years. With this higher cash ratio, the company is in a better position to pay off its current liabilities.
Below is a quick comparison of the cash coverage ratio of Colgate’s vs. P&G vs. Unilever

From the above discussion, it’s clear that the cash coverage ratio could be one of the best-measuring grids of liquidity for a firm. But there are few limitations of this ratio, which may become the reason for its infamous nature.

Having talked about the limitations, the cash ratio could be less useful than other liquidity ratios. But if you still want to check how much cash is lying around in your company, it’s good to use this guide to find out cash ratio on your own.