What is Defensive Interval Ratio?

Defensive Interval ratio is the ratio which measures the number of days within which the company can continue its working without the requirement of using its non-current assets or the outside financial resources and it is calculated by dividing the total current assets of the company with its daily operating expenses.

For example, if ABC Company has a DIR of 45 days, that means ABC Company can operate for 45 days without touching the noncurrent assets or long terms assets or any other financial resources. Many call this ratio as a financial efficiency ratio, but it is commonly considered as “liquidity ratio.”

Let us look at the above chart. Apple has a Defensive interval ratio of 4.048 Years, while Walmarts Ratio is 0.579 years. Why is there such a big difference between the two? Does this mean that Apple is better placed from the liquidity point of view?

To calculate Defensive Interval Ratio (DIR), all we need to do is to take out the liquid assets (that are easily convertible into cash) and then divide it by average expenditure per day. In the denominator, we cannot include every average expense as that may not be getting used in the day to day activities. And on the numerator, we can only put items that are easily convertible in cash in the short term.

In simple terms, go to the balance sheet. Look at the current assets. Select the items that can easily be converted into cash. Add them up. And then divide it by the average daily expenditure. 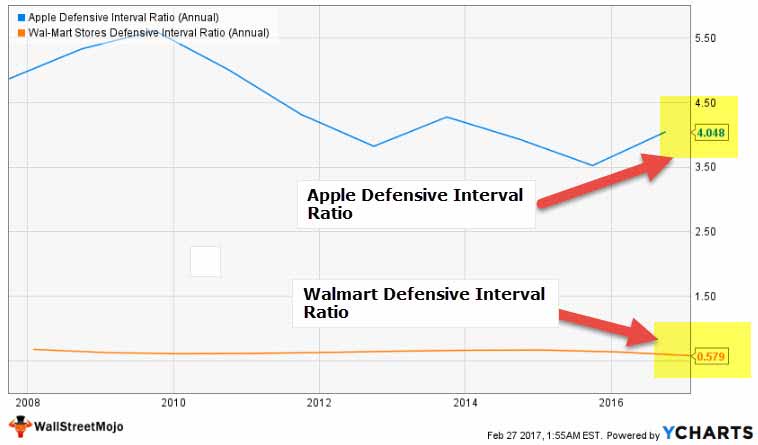 Now the question is what we would include in the current assets.

We need to take only those items that are easily converted into cash or equivalent. There are three things we would generally include in the numerator –

We have included these three because they can be easily converted into cash.

Now let’s look at the denominator.

The defensive Interval Ratio is considered to be the best liquidity ratio by many financial analysts. Most of the liquidity ratios like quick ratio, current ratio assess the current assets with current liabilities. And thus, they are unable to produce an accurate result about liquidity. In the case of this ratio, the current assets are not compared to current liabilities; rather, they are compared to expenses. Thus, DIR is able to produce almost an accurate result of the liquidity position of the company.

But there are few limitations as well, which we will discuss at the end of this article. So the idea is to calculate DIR along with quick ratio and current ratio. It will give the investor a holistic picture of how a company is doing in terms of liquidity. For example, if Company MNC has huge expenses and almost no liabilities whatsoever, then the DIR value would be drastically different than the value of the quick ratio or current ratio.

While interpreting the result you get out of DIR calculation, here’s what you should consider going forward –

We will look at a few examples so that we can understand DIR from all angles. Let’s get started with the first example.

Mr. A has been investing in businesses for a while. He wants to understand how Company P is doing in terms of liquidity. So he looks at Company P’s financial statements and discovers the following information –

Particulars of P Company at the end of 2016

How would he find almost an accurate picture of Company P’s liquidity?

This is a simple example. Here we need to calculate Defensive Interval Ratio (DIR) by applying the formula straight since all the information is already given.

The formula of DIR is –

After the calculation, Mr. A finds that the liquidity position of Company P is not good enough, and he decides to look into other aspects of the company.

Mr. B isn’t able to find the Balance Sheet of Company M., But he has the following information available with him –

Mr. B needs to find the current assets of Company M, which are easily convertible into cash.

We have been given the information for computing the average daily expenditure, and we know how to calculate the defensive interval ratio. By applying the information given above, we can find out the current assets of Company M, which are easily convertible.

We will start by computing the average daily expenditure.

So, let’s calculate using the given information –

Now we will use the formula of DIR to find out the current assets which can easily be converted into cash.

Now Mr. B has got to know how much current assets of Company M can be converted into cash in the short term.

Mr. C wants to compare the three companies’ liquidity position. He has furnished below the following information to his financial analyst to come to the right conclusion. Let’s have a look at the details below –

The financial analyst needs to find out which company is in a better position to pay off the bills without touching any long term assets or external financial resources.

This example is a comparison between which company is in a better position.

Now we will calculate the annual daily expenditure.

Now we can calculate the ratio and find out which company has a better liquidity position.

*Note: All of these are hypothetical situations and only used to illustrate DIR.

From the above computation, it’s clear that Co. M has the most lucrative liquidity position among all three.

Let us calculate the Defensive Interval Ratio for Colgate.

Step 1 –  Calculate Current Assets that can be converted into cash easily.

In order to find the average daily expenditure, we can use the following formula.

Here it is a bit tricky as we are not spoon-fed with all the necessary information. 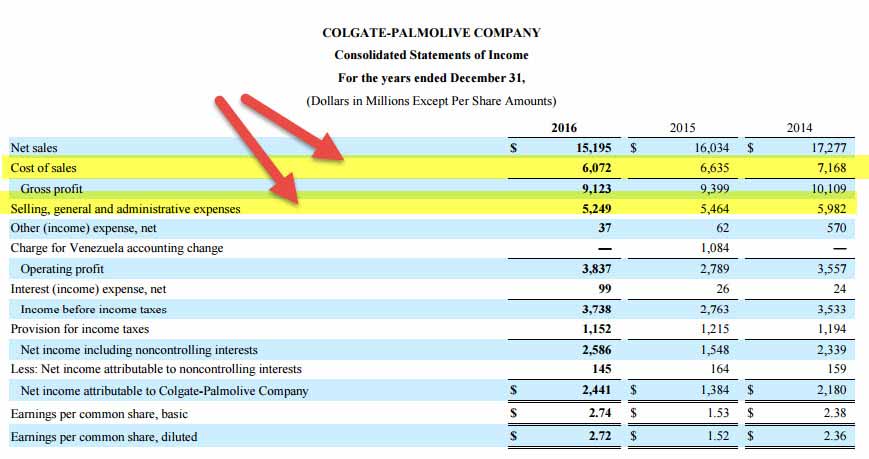 In order to find the non-cash, we need to scan the annual report of Colgate.

There are two types of non-cash items that are included in the Cost of Sales or Selling General & Admin expense.