Remember, there are no good or bad standard deviations; It is just a way to represent data. But generally, a comparison of SD with a similar data set is being made for better interpretation.

E.g., Let’s say a financial analyst analyzing the returns of Google stock and wants to measure the risks on returns if investments are made in the particular stock. He collects the data of the historical returns of google for the last five years, which are as follows: 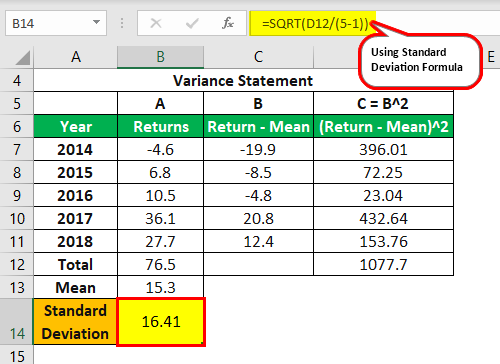 Let’s say Doodle Inc has similar annual average returns of 16.5% and SD ( σ ) of 8.5%. i.e., with Doodle, you can earn similar yearly returns as with Google but with lesser risks or volatility.

Again let’s say Doodle Inc has annual average returns of 18% and SD ( σ ) 25%, we can surely say that Google is the better investment as compared to Doddle because the standard deviation of Doodle is very high as compared to the returns it provides while Google provides rather lower returns than Doodle but with very low exposure to risks.

Note:
Investors are risk-averse. They wanted to get compensated for taking higher risks.

States that for normal distributions, nearly all (99.7%) of the data falls within three standard deviations of the mean, 95% of data fall within 2 SD, and 68% fall within 1 SD.

John and his friend Paul arguing about the heights of their dogs to properly categorize them as per rules of a dog show where various dogs will compete with different heights based on categories. John and Paul decided to analyze the variability in heights of their dogs using the concept of standard deviation.

They have 5 dogs with all types of heights, so they noted their heights as given below: 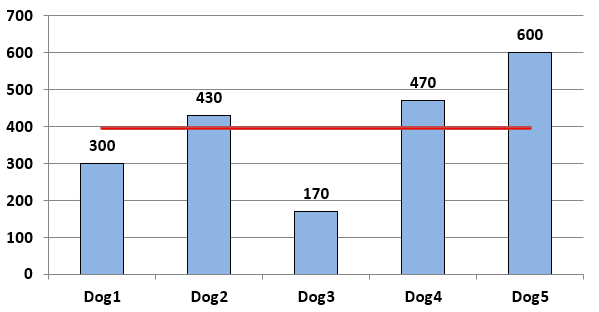 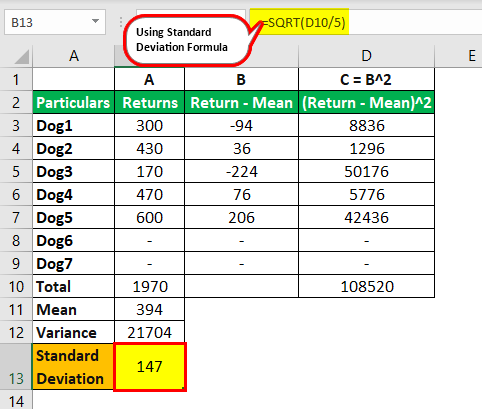 The red line in the graph shows the average height of the dogs.

Now using the empirical method, we can analyze which heights are within one standard deviation of the mean:

The theory of the Empirical Method applies only to data-sets that are normally distributed and whose shape appears like a bell curve.

Outliers can artificially inflate standard deviation, so identify them and remove them from the better analysis.

For example, 20 students of a mathematical class graded with an average of 60% marks on a practice test. The teacher seems concerned with the poor results, so she decides to calculate the std deviation of marks to check whether students score far or close to mean marks.

As per the calculation of standard deviation, the std deviation is 22.26%, which he thinks is very high. Let’s examine the teachers’ concerns. 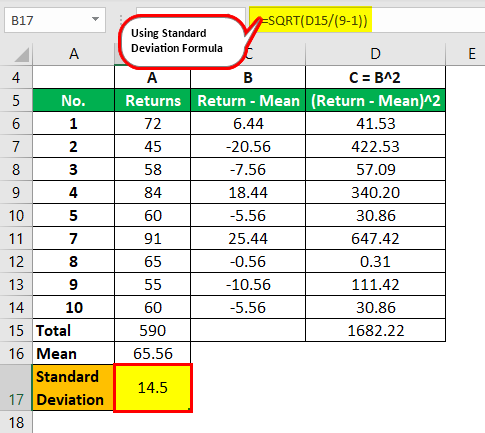 In statistics, it informs how tightly various data points are clustered around the mean in a normally distributed set of data. If the data points are closely bunched near the mean, then the standard deviation will be a small figure, and the bell curve will be steeply shaped and vise-Versa.

The more popular statistical measures like mean (average) or median may mislead the user due to the presence of extreme data points, but standard deviation educates the user about how far the data point’s lies from the mean. Also, it is helpful in the comparative analysis of two different data sets if the averages are the same for both the data sets.

Hence they present a complete picture where basic mean can be misleading.

This has been a guide Standard Deviation Examples. Here we discuss its examples along with step by step explanation. You can learn more about accounting from the following articles –