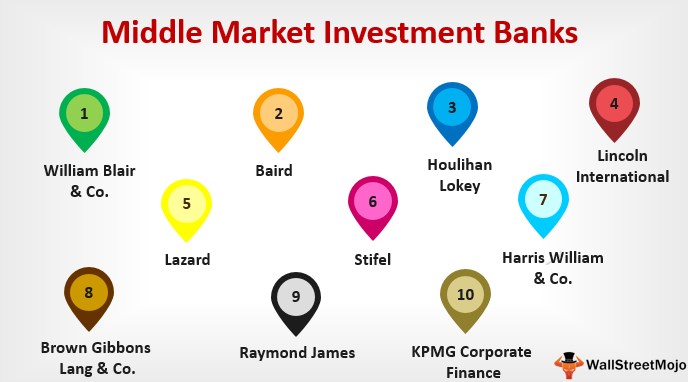 William Blair & Co. was founded in 1935, is based in Chicago, and is into investment banking, with its presence primarily in China and Asia. It is a privately held investment banking firm that provides a host of financial services to its clients.

William Blair boasts of an excellent office culture where the customer is the king and client requirements stand supreme.

Baird was founded in the year 1919 and is middle-market investment bank with offices in the United States, Europe, and Asia. It is an employee-owned investment banking firm that employs more than 3100 professionals.

Braid is into private wealth management, asset management, private equity, fixed income, and equity capital markets. It won’t be wrong to say that it is a one-stop-shop for all kinds of financial services. Baird offers its services to the following industries namely, healthcare, real estate, technology, consumer, energy, distribution, energy, and industrial technology.

Like any other middle-market investment bank, Baird provides ample learning and growth opportunities to its employees.

Baird has its presence across continents and is one of the largest privately-held financial services firms.It requires extraordinary zeal and fervor to be a part of such a high demanding workplace.

Houlihan Lokey was founded in 1972 and is headquartered in Los Angeles, California. It is bigger than its counterparts and is owned by 250 of its employees. It is a globally recognized advisory-focussed investment bank. The firm has various awards to its credit, the Best Investment Banking Firm Award being one of them.

Houlihan Lokey’s services involve financial restructuring, corporate finance, financial advisory services along with M&A, which is their strength and the main reason, it is considered as one of the best in the middle market investment banks.

Houlihan Lokey is very stringent in selecting its employees, it picks up the best the market has to offer. Its employees are supposed to be intelligent people dedicated to solving client needs with their creative outputs.

Houlihan Lokey has created a name for itself in a lot of international circuits. It has its presence spread across the United States, Europe and Asia. It focusses on a lot of industries be it automotive, healthcare, aerospace, real estate, food, telecommunications, sports et al. Houlihan Lokey is considered the Best amongst its peers and is the It place to be for budding investment bankers.

Lincoln International was founded in 1996 and is based in Chicago. It is considered as an Elite institution with its offices spread across various international cities some of them including London, Amsterdam, Frankfurt, Mumbai, Sao Paulo, Tokyo, New York, Paris, Los Angeles, Beijing, Moscow, Milan and Vienna. According to their website, it completed more than 130 advisory assignments in the year 2013.

Lincoln International provides financial advisory and restructuring services along with mergers and acquisitions. In fact, its M&A department is considered to be one of the best and is known to be quite aggressive in its approach.

Lincoln International is one of the best middle-market investment banks to work with. It is known for its aggressive approach and expects its employees to work hard and maintain the name it has created for itself. It has more than 300 employees and is a fast-growing firm.

Since Lincoln International is forward-looking and established firm with its offices sprawling across countries, it expects the same zeal and dedication from their employees.

Lazard was founded in 1848 and was incorporated in Hamilton, Bermuda, though it runs its operations from New York United States. It has more than 2600 employees across its various offices in more than 42 cities across 27 countries with its major presence in the United States. Lazard Middle Market is the middle market investment bank arm of the brand Lazard which is a boutique bank.

It is a financial advisory and asset management firm and earns its revenues mostly from mergers and acquisitions. Lazard MM is into asset management, investment banking, and other financial services and caters mostly to the institutional clients.

Lazard the boutique bank has created a niche for itself in the market, it is a known name, and a trustworthy brand Lazard MM is taking the same legacy forward, with Lazard’s deep and dependable connections.

Lazard MM has a name and reputation to back its core business, mergers, and acquisitions. With such strong connections in the market, dealing with private equity clients becomes much smoother and reliable.

Stifel was founded in the year 1890 and is headquartered in Missouri, United States. Its employee strength is around 5200 and has far-reaching and widespread experience in completing over 3100 public offerings, 900 M&A transactions and 400 private placements since 2000. It focusses on various industries namely, defense, aerospace, financial institutions, healthcare, energy, real estate to name a few.

Its services include asset management, financial services, investment banking, and management. Stifel is recognized for its IPO advisory in the middle market segment, it has done more business into IPO whether it is into equity or debt.

Stifel has very powerful and creditworthy people at the helm of affairs, that makes it an ambitious firm with strong and credible connections. Since its prime focus is on IPO, it meticulously provides expertise at each and every stage IPO.

Stifel’s strength lies in its strong advisory expertise and research-based analysis in the launching of a company’s IPO. With its deep connections, Stifel is considered as one of the best options for a company planning to launch its IPO in the middle market segment.

Harris William & Co. was established in 1991 and is headquartered in Virginia, United States. It employs more than 200 employees and has offices mostly in the United States and Europe in cities like Frankfurt, London, San Francisco, Boston, Philadelphia, Minneapolis and Cleveland.

Harris William & Co. is a subsidiary of PNC Financial Services and has acquired a few middle-market investment banks in the preceding decade. It provides financial advisory in fairness opinions, restructuring, and mergers and acquisitions. Harris William & Co. established its name in the Leveraged Buyout (LBO) transactions and is quite popular with the private equity firms which are looking for the buy-side advisory of the M&A deal.

Harris William & Co. is an established name in the M&A scenario, it has gained the client’s trust and confidence by establishing and maintaining high standards of performance. It has focussed its business towards specific industries namely, media and telecom, health care and life sciences, business services, consumer, transportation and logistics, specialty distribution, energy, and power.

Brown Gibbons Lang & Co. popularly known as BGL was founded in 1989 and is headquartered in Cleveland, United States. It is an independent middle-market bank providing financial service to its clients spread across the United States primarily in Chicago, Newport Beach, and San Antonio. It was formed with the aim of providing sound and unbiased advice from experienced and qualified advisors to business owners who were facing challenges in their industries. Businesses owners wanted experts who could analyze the opportunities and issues affecting their industries and businesses in particular, Brown Gibbons Lang & Co. took advantage of this opportunity and hence serves a very niche segment in the middle market business.

Since Brown Gibbons Lang & Co. is an independent banker, it is generally believed that there are no cross-selling goals for its employees hence the advisory service will be unprejudiced and impartial.

Brown Gibbons Lang & Co. serves a very niche segment of the middle market companies and has kept its focus on limited industries some of them being consumer products and retail services, metals and metals processing, healthcare and life sciences, and real estate industries.

Raymond James Financial was founded in 1962 and is headquartered in Florida, United States. It has more than 6500 employees who manage around 2.7 million accounts in more than 2600 locations throughout the United States of America, Canada, South America, and other locations. It provides financial services to individuals, corporations, and institutions and engages in investment and financial planning in securities and insurance brokerage, investment banking, asset management, cash management, banking, and trust services.

Raymond James Financial provides a host of financial services to its clients focusing primarily on IPO and M&A’s. It is a middle-market investment bank that concentrates its effort and business on companies that are larger in size in the middle market segment.

Raymond James merged with Morgan Keegan & Co. in the year 2012 and became a large and recognized name in the middle market investment banks. In the year 2013, Raymond James declared profitability for 100 consecutive quarters.

Raymond James has spread its services to various industries viz a viz real estate, security, defense, infrastructure, financial services, healthcare, consumer, retail energy, transportation, technology, and services. With its 2012 merger, Raymond James has expanded not only its reach but also its expertise and experience.

KPMG is a financial services firm founded in 1987 and headquartered in the Netherlands. It is one of the Big Four auditors, others being EY, PwC and Deloitte. Over the last decade, KPMG has been spreading its wings in the financial services domain and has successfully carved a niche for itself in the middle market investment banking area. KPMG has decades of expertise and knowledge along with a vast network of clients spread across nations which completely trust KPMG the brand.

KPMG is primarily into accounting, tax and audit services, the financial services arm of KPMG i.e KPMG Corporate Finance, meticulously analyses every aspect of the deal and provides insights into the analysis of strategic options, assessment, structure formation of the deal along with the mechanisms needed to present the deal in the market, keeping an eye on the transaction process and negotiation with the interested parties for a successful closure to the deal.

KPMG is a brand anyone can vouch for, its long legacy of awards not only for its professional excellence but also for being the preferred employer for working mothers speaks volumes for its exceptional office culture.

KPMG brings along with itself a strong and reputed name and has created a niche for itself with its professional expertise in various industries and countries. KPMG Corporate Finance, however, has limited itself to 11 verticals namely, insurance, real estate, consumer markets, media and marketing, technology and communications, energy and natural resources, business services, cleantech and industrial technology, financial services, healthcare, and industrial markets.