A business entity is an entity that that carries out business activities as per the respective laws of the country and can be of various types including private company, public company, limited and unlimited partnerships, statutory corporation, holding company, subsidiary company and more. The form in which an entity is established is very important as different entities are subjected to different laws and also carry different features. 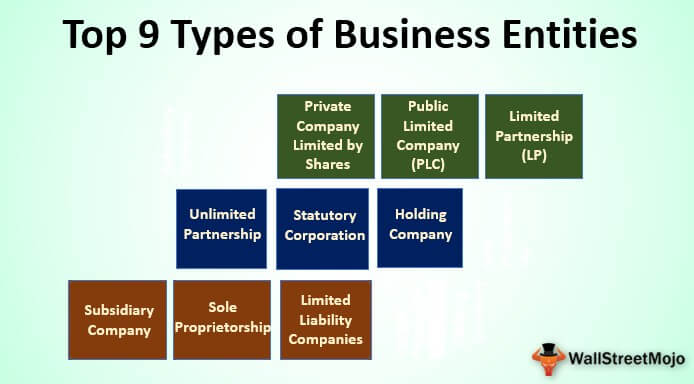 It is a type of privately held company wherein the liability of the shareholders is limited to the amount of share capital paid up by them. As a result, the personal assets of the shareholders can’t be resorted to in case the company goes insolvent. In such a case when the company goes insolvent, the maximum amount that can be lost for a shareholder is the amount of share capital paid by him. Also, the shares of such a company can’t be listed on the stock exchanges for public trading. Normally a private limited company is subject to fewer disclosure requirements than a public limited company.

It is also a type of company in which the liability of the shareholders is limited to the extent of share capital paid by them. However, such companies are free to offer shares to the general public. That is why such companies are also known as “publicly traded companies”. They may either be listed on the stock exchange or may not be listed. There may be requirements concerning minimum share capital depending on the law of the land in which the company is incorporated. In the UK such a company must include at the end of their names, words “PLC”.

It is a type of entity that is created by the state itself. The nature of such corporations will depend on the jurisdiction under which they are created and thus, may depend from one jurisdiction to another.

Holding Company refers to a company that owns the share capital of another company. Such companies are also known as parent companies. Such companies may or may not be carrying out business activities themselves. Sometimes these companies are created to hold the intellectual property for the subsidiary company. There exists a criterion for a minimum shareholding in a company, to be called the holding of such a company. A company if holds the prescribed shareholding in another company, will be known as holding company of that other company.

Subsidiary Company is a company that is owned or controlled by another company (known as a parent or holding company). A subsidiary may be created either by one company being holding prescribed share capital company or by way of one company exercising control over the composition of the board. The company of which share capital is held or on whose board of directors the control is exercised is said to be a subsidiary company.

In the case of such an entity, there exists no separate legal entity and as such, there is no difference between the owner and the entity. It is controlled and operated by a single person only. The liability of such sole proprietor is unlimited and he is the sole owner of assets of the business.

LLC is a type of body corporate that is prevalent in the U.S. In the case of such entity, pass-through taxation is followed which means that LLC is not subjected to taxation and instead members are liable to pay tax on the income of the LLC. Also, the liability of the members is limited in the case of LLC. It is known to be a hybrid entity having features of both, corporation as well as partnership. This is because the liability of members is limited as in the case of a corporation and pass-through tax structure is followed as in case of a partnership.

This has been a guide to Types of Business Entities. Here we discuss the top 9 types of business entities that include corporations, partnerships, sole proprietorships, cooperatives, limited liability companies, etc. You can learn more about financing from the following articles –