What is a Variable Interest Entity?

Variable interest entity (VIE) generally refers to an entity in which a public company has a controlling interest even though it doesn’t own majority shares and therefore, the public company has the ability to direct the VIE’s significant activities and control the flow of profits/losses. Common activities of a VIE are generally a transfer of assets, leases, hedging of financial instruments, R&D, etc.

‘A,’ an Electric company, creates ‘B,’ a power finance co. B issues 100% non-voting stock for $ 16 Million to an outsider investor and issues debt securities to A for $ 384 million. B then purchases an electric generating plant for $400 million and leases it to A for $ 12 million per year for 5 years.

At the end of the lease term, A must either renew the lease for 5 years or purchase the generator for $ 400 million or sell the electric generator plant to the third party. Also, if B is unable to repay the equity investor, then A pays $ 16 million to an equity investor.

In the above example, the below factors point that company B is a VIE, and company A is the primary beneficiary.

Hence here, A has to consolidate the Financials of B along with itself. 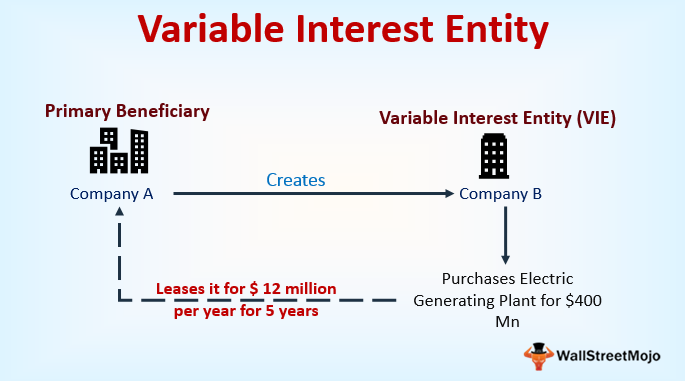 Let’s say Enron wants to build a factory for which it needs to invest capital, say $ 10 Million. Now Instead of borrowing money and building a factory through the legal entity of Enron, it created another entity called special purpose entity (SPE) to build the factory.

Now, SPE will go to a bank and ask for a loan of $ 10 million. Enron will guarantee the loan for the SPE. Bank will lend $ 9.7 million to SPE (net of equity investment) based on the guarantee of Enron, and for balance equity investment, Enron would request third parties who would be interested in the project or affiliates of Enron to invest $ 0.3 million.

In this arrangement, an Equity investment of $ 0.3 million is 100% outside of Enron and thus would make SPE independent of Enron, and hence it would no longer have to consolidate the SPE in their books. But the value of Equity investment is minuscule compared to the project cost (3% of $ 10 million), and Enron is financing 97% of the deal by guaranteeing the debt. Hence Enron is practically controlling the SPE.

In this way, Enron could move bad assets out of their balance sheet into the SPE and even book gains on the sale of assets to SPE (which is essentially its own company).

By such arrangements entered, some companies were avoiding reporting bad assets and liabilities for which they are responsible and to delay reporting losses that are incurred or report gains, which were illusionary.

Thus, due to the above, the concept of the variable interest entity was introduced as a consolidation requirement so that stakeholders can see the fair picture of the financials of the company.

For the purpose of consolidation, Variable interest must be identified, determine whether the entity is a VIE, Identify the primary beneficiary of the VIE which will consolidate the transactions of VIE in its books and thereby present the consolidated financials of all different legal entities which are under common control so that stakeholders can get the correct view of the financial position of the company as a holistic economic entity.

This has been a guide to what is Variable Interest Entity (VIE) and its definition. Here we discuss the conceptual examples of the variable interest entity. You can learn more from the following articles –