A soft loan means a loan with generally no interest rate or an interest rate lower than the market interest rates and is offered majorly by the government organizations to the developing countries to fund their needs. Soft loans which are also called soft financing or concessional funding has very lenient terms and also a lot of grace period to pay back the loans. Though they are generally offered for the development of the developing countries, sometimes it is also granted to have political and economic ties with a country.

Some of the examples of soft loan are as below: 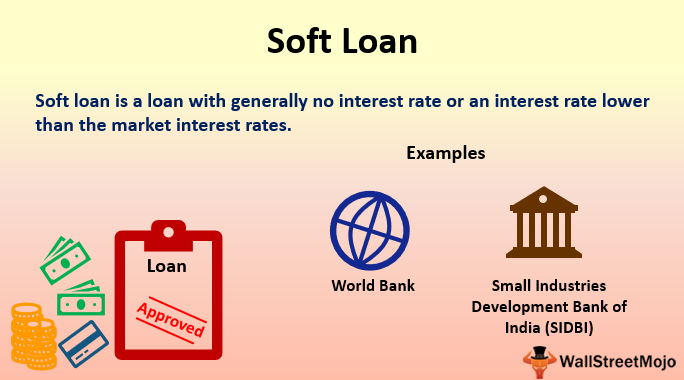 Soft Loan should be taken whenever there is poor creditworthiness and a serious need for a country to grow. The terms of the soft loans are lenient and ability based. Meaning the borrower is expected to pay back the loan when it can.

The World Bank with its arms of IDA and IBRD should try its best to offer soft loans for the poorer nations with very low per capita income and in a dire state where it needs money to grow. They can also help a nation to grow on the economic front by granting a soft loan to another country with guidelines to get business in return and promoting exports. It also helps to establish political and economic relationships with other nations.

The businesses in a country that are in the nascent stage should make the maximum use of soft loans by governments to grow themselves and also help in the development of the nation. There are proper guidelines established by the government agencies as to who is eligible to get the soft loans and the granting process involves a lot of parameters.

This has been a guide to what is soft loan and its meaning. Here we discuss examples of soft financing along with advantages and disadvantages. You can learn more about investment from the following articles –