Percentage Change can be defined as a % change in value due to changes in the old number and new number and the values can either increase or decrease and so the change can be a positive value (+) or a negative value (-).

The formula has to be used carefully. The position of the old value and a new value can be interchanged as follows:

But the outcome of this equation has to be interpreted vice-versa to interpretation explained above.

Company XYZ, in the first year after its incorporation, made a profit of $ 15 million, and in the next year its profits increased to 16.5 million. What is the percentage change in its profits?

A calculation can be done as follows-

It can be interpreted as value has increased by 10% from the old number.

Now let us take an example of an organization analyzing its financial statements of the current year and comparing its figures with previous year figures. Its profit and loss statement for the current year shows a sale of $ 4,950,000, and profit appear to be $294,944. However, its sale in the previous year was $5,475,000 and a profit of $ 175,500. What is the percentage increase or decrease in organization profit and sales?

First of all, we will calculate % change in a sale by applying the formula:

Calculation of change in a sale can be done as follows- 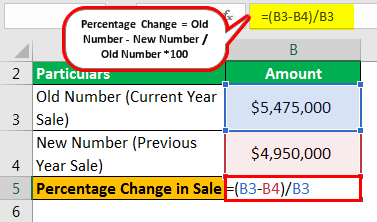 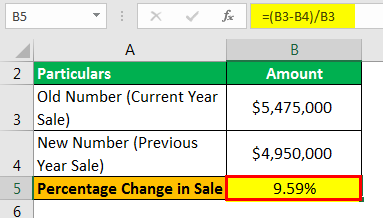 Now we will calculate the % change in profit: 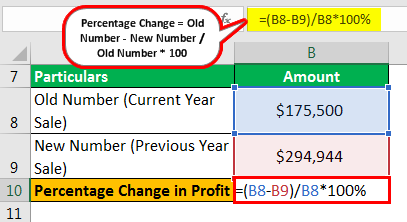 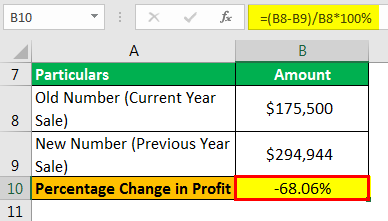 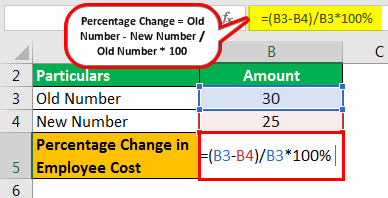 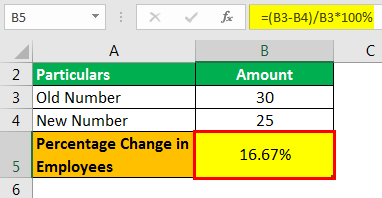 Use below given data for calculation of the change in the employee cost. 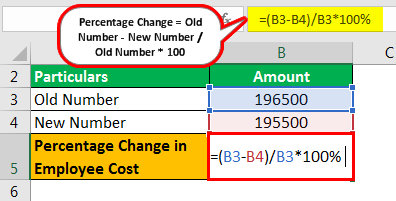 Percentage change is an important tool to give clarity of thought about the direction. Either change is moving in a favorable direction, or do we need to change our strategies to bring changes as per our goals and objectives. As shown in both of the above examples, changes in the first example are favorable but changes in the second example were not favorable in the first example. Even though the firm sales was decreased by 9.59% but company profit has increased by 68.06%.

It shows that changes adopted by the organization resulted in a favorable outcome. But is the second example, even though the company has removed its 5 employees still its employee cost has increased by 0.5%. It gives them clarity of thought that something wrong is happening in the organization.

You can use this calculator

This has been a guide to the Percentage Change Formula. Here we provide step by step calculation of % change along with practical examples and a downloadable excel template. You can learn more about accounting and budgeting from the following articles –