Tier 1 Capital Ratio is the ratio of Tier 1 capital (capital that is available for banks on a going concern basis) as a proportion of bank’s risk-weighted assets.  Tier 1 capital includes the bank’s shareholder’s equity, retained earnings, accumulated other comprehensive income, and contingently convertible and perpetual debt instruments of the bank.

Basel III accord focused on building up the core capital of the banks. As a result, the norms capped the amount of AT1 capital that can be considered to reckon Tier 1 capital, at 1.5% of the bank’s risk-weighted assets.

Consider an example of a bank determining its risk-weighted assets at $150,000 million. The amount that qualifies as Tier 1 capital after regulator adjustments add up to $10,500 million, with CET1 capital comprising $9,500 million and AT1 capital accounting for the balance of $1,000 million.

This can be calculated as follows: 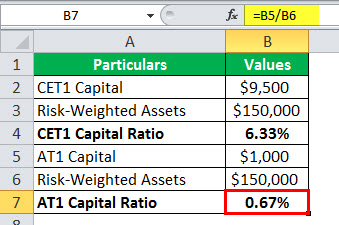 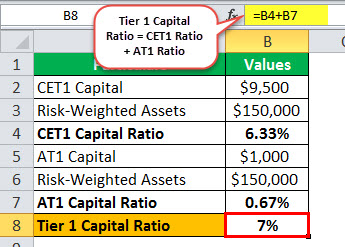 Basel III norms resulted in the tightening of Tier 1 capital norms and the introduction of the Tier 1 leverage ratio to prevent excessive build-up of leverage and to increase the capacity of the banks’ capital to be able to cushion possible losses from its exposures. A more robust Tier 1 capital ratio indicates the better ability of the bank to be able to absorb losses. Therefore, as a general rule of thumb, the higher the ratio, more particularly the CET1 capital ratio, the better.

This has been a guide to What is Tier 1 Capital Ratio & its Definition. Here we discuss formula to calculate the tier 1 capital ratio and the difference from tier 1 leverage ratio. You can learn more about from the following articles –