What is the Sum of Years Digits Depreciation Method?

Let us understand the concept with an example below:

A Computer Company has purchased some computers worth $ 5,000,000. It cost them $ 200,000 to transport the Computer to their location. The Company considers that the useful life of Computers is 5 years and they can expire the computers at a value of 100,000.

Now, considering the above example, let us try to create a depreciation schedule for the asset using the Sum of year depreciation method. 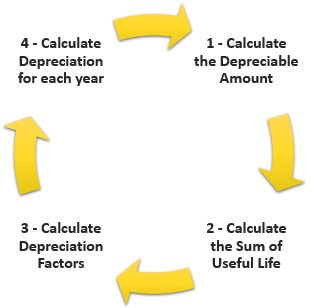 The depreciation factors are as follows

Step 4 – Calculate Depreciation for each year.

Likewise, we can calculate the depreciation expense for year 2, 3 and 4.

Year 5 depreciation is not calculated using the depreciation factor. As it is the last useful year, we depreciate the full amount that is left for depreciation. In this case, it is $340,000

As can be seen from the above depreciation schedule of the sum of the year depreciation method, the depreciation expense is highest in the early years and keeps decreasing as the asset life increases, and it becomes obsolete.

This has been a guide to what is is the Sum of Years Digits Method of Depreciation. Here we discuss the steps to calculate the sum of years depreciation along with practical examples and advantages. You may learn more about accounting from the following articles –