Difference Between Margin and Markup

The first & foremost step in determining the profitability of a firm is defining the pricing structures of its products. It can be realized by understanding the margin and markup as these numbers play an important role in determining the revenues & bottom line in the financial statements.

Let’s see the top differences between margin vs. markup.

Much like the analogy of cup being half full or half empty, margin and markup are two different outlooks on the relationship between price vs. cost. A margin is more with respect to sales, while the latter is more with respect to a value derived on the manufacturing cost. Both have their significance in financial statement analysis.

In absolute terms, both refer to the same numeric value. However, the perspective makes them all together with a different concept. Refer to the diagram below for our earlier example: 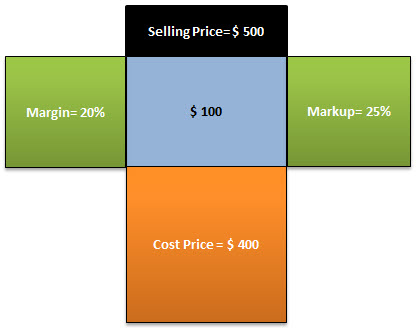 These concepts can be confusing while deriving pricing and, if not investigated properly, can affect your profitability. Since the reference for calculating markup is cost price, it will always be greater than the margin, the basis of which is always a higher value – selling price. As a thumb rule, the markup percentage must always be higher than the margin percentage else you are making losses in the business.

The markup calculation is more likely to impact pricing changes over time than a margin-based price. It is since the cost upon which the markup number is based may differ with time, or its calculation may vary, resulting in different costs, which would, therefore, lead to different prices.

The following bullet points illustrate the differences and the relationships between the margin and markup percentages at distinct intervals:

To derive a general markup percentage, the expression would be as follows:

For example, if the manufacturing cost of a product is $100 and you want to earn a margin of $20 on it, the calculation of the markup percentage is:

They try to present a different perspective on the same financial status. However, at any point in time, markup is always greater than gross-margin, and hence it overstates the profitability of the firm. Due to this reason, markup is most often preferred as a reporting mechanism by the sales and operations department. For any person with a non-financial background, it will look like a transaction is obtaining a larger profit if they are presented with Markup numbers than corresponding Margin numbers.

Getting to understand the relationship between margin and markup is vital for a business. Do the math wrong, and you may end up losing money without even realizing it. On the other hand, if done right, it can help in planning and implementing your long term and short term strategic initiatives like planning for more penetration in the market or cross-selling to your existing customers.

This article has been a guide to Margin vs. Markup. Here we discuss the top differences between margin and markup along with infographics and comparison table. You may also have a look at the following articles –