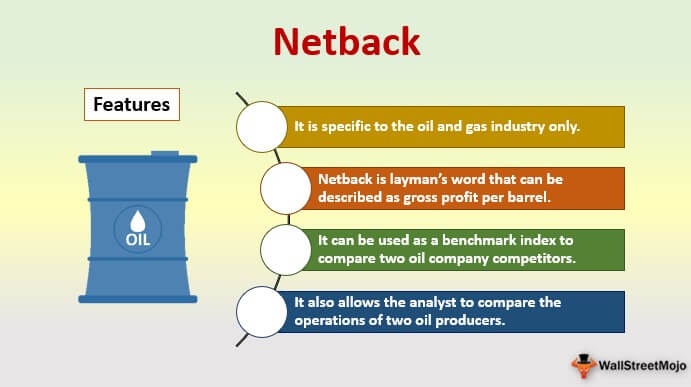 Thus, it gives us the gross profit per barrel of oil where the sales obtained or the revenue generated from selling per barrel of oil is considered as the price of the barrel. From this, we need to deduct the royalties paid for selling the oil. The overall production cost involved starting from the extraction of oil to selling it, and finally, the transportation cost to supply the oil/gas to end consumers. After deducting all the three factors mentioned above from the sales revenue, we finally arrive at the gross profit earned per barrel of oil, which is called the Netback.

A basic example can be explained in a scenario where suppose Aramco world’s largest oil-producing company has its operation in Saudi Arabia, where it extracts oil to supply all around the globe. Let us assume for every barrel of oil which it extracts. It pays $10 as royalties, $15 as production cost i.e., mainly consumed in the extraction of oil, and $10 as the transportation cost to supply the oil. Now let us consider per barrel of oil selling at $120.

Thus we can say Aramco’s operating Netback is $85, and this can be used as a comparison benchmark with other players or competitors to compare their operation efficiency.

Oil and gas producing companies have gone to an extent where they are selling their products under what we call netback agreements. This contract or agreement assures the customer or the buyer of oil/gas of a commercial margin or cut off while also assuring floor prices for the producing companies to cover up the cost of production. This leads to a win-win situation for both parties. Again some are worried of such an agreement because during the 1980s, similar kind of agreement by oil producers who were having a surplus of oil and were eager to sell the same in the market resulted into a drastic drop in the prices of oil as netback pricing forced the refiners to maintain its business irrespective of the sharp drop in oil prices.

This has been a guide to what is Netback & its Definition. Here we discuss its calculation and its features along with examples, advantages, and disadvantages. You can learn more about from the following articles –