In mathematics we had exponents which were the power to a given any base number, in excel we have a similar inbuilt function known as POWER function which is used to calculate the power of a given number or base, to use this function we can use the keyword =POWER( in a cell and provide two arguments one as number and another as power.

A Power in Excel is a Math/Trigonometric function computes and returns the result of a number raised to a power. Power Excel function takes two arguments the base (any real number) and the exponent (power, that signifies how many times the given number will be multiplied by itself). This means that, for example, 5 multiplied by a power of 2 is the same as 5 x5.

Explanation of POWER Function in Excel

Power in Excel takes both the argument as a numeric value; hence the arguments passed are of integer type where Number is the base number, and the Power is the exponent. Both arguments are required and are not optional.

We can use the Power function in excel in many ways, like for mathematical operations, power function equation and can be used to compute the relational algebraic functions.

How to Use POWER Function in Excel

Excel POWER function is very simple and easy to use. Let us understand the working of POWER in excel by some examples.

For example, we have a power function equation y=x^n (x to the power n), where y is dependent on the value of x, and n is the exponent. We also want to draw the graph of this f(x, y) function for given values of x and n=2. The values of x are:

So, in this case, since the value of y depends upon the nth power of x, we will calculate the value of Y using the POWER function in Excel.

Now, selecting the values of x and y from range B4:K5, select the graph (in this, we have selected the Scatter graph with smooth lines) from the insert tab.

So, we get a linear, exponential graph for the given POWER Function equation. 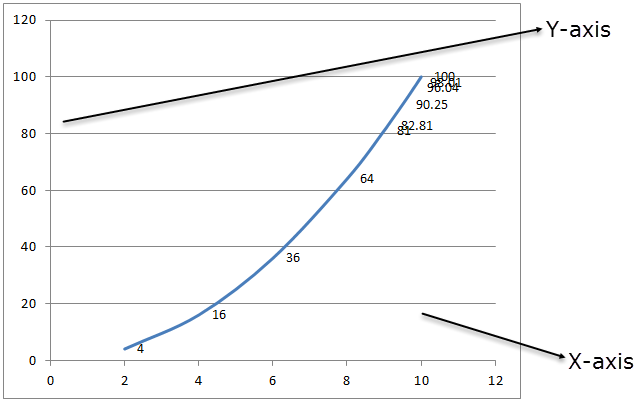 b2-4ac is termed as discriminant and it describes the number of roots a quadratic POWER Function equation has.

Now, we have some list of quadratic POWER Function equations given in Column A, and we need to find the roots of the equations.

^ is called the exponential operator used to represent the power (exponent). X2 is the same as x^2.

We have five quadratic POWER Function equation, and we will be solving them using the formula with the help of the POWER function in excel to find out the roots. 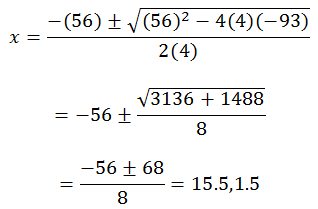 To implement this in excel formula, we will use the POWER function in Excel and the formula will be

So, the complete formula will be,

Both the formulas are concatenated together with String “Roots of equation are”.

Using the same formula for other POWER Function equation, we have,

So, for different mathematical calculations, we can use the POWER function in Excel.

Using the compound interest formula and implementing it into excel formula using the POWER function in Excel, we have the formula.

According to Newton’s gravitation law, two bodies at a distance of r from their center of gravity attracts each other in the universe according to a gravitational POWER Excel formula.

Let us calculate the magnitude of gravitational force by which the Sun pulls the Earth.

In excel, if we want to calculate the gravitational force, we will be again using the POWER in Excel that can operate over big numeric values.

Since the value obtained as force is a big number of Excel expressed it scientific notation. To change it into a fraction, change the format to the fraction. 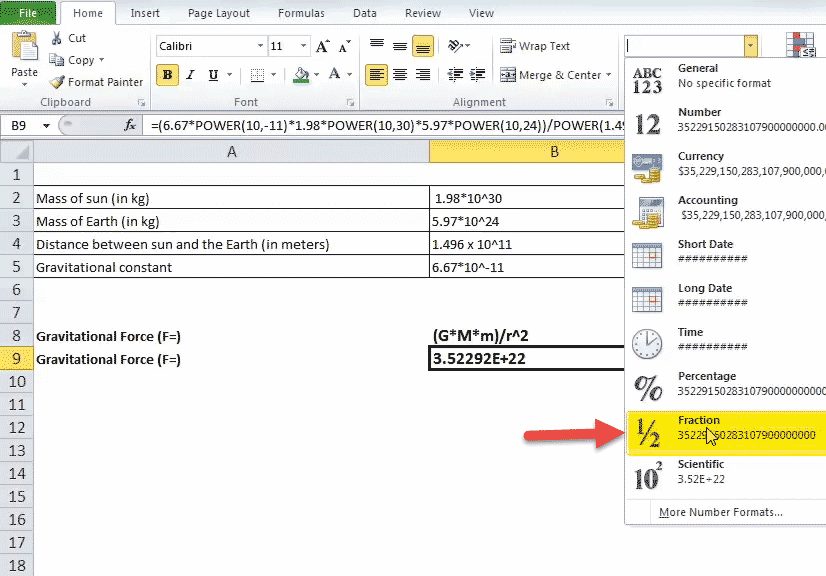 This has been a guide to POWER Function in Excel. Here we discuss the POWER Formula in excel and how to use the POWER Excel function along with excel example and downloadable excel templates. You may also look at these useful functions in excel –