An accelerated share buyback, also known as a repurchase, means that the company purchases its own shares to reduce the outstanding shares in the open market. The reduction in the number of shares outstanding in the market eliminates any potential threats from the large shareholders who are on the lookout for increasing their control to significant levels in the company. Using a buyback, the company invests in itself, which improves the proportional share of earnings; this steps up the valuation of a stock.

As seen from the above snapshot, United Technologies entered into an “accelerated buyback” agreements with two banks (Deutsche Bank AG & J.P.Morgan Chase) to repurchase $6 billion worth of the company’s stock. Is Accelerated Buyback different from the Share Buyback from the open market?

How does Accelerated Buyback Work?

An “accelerated” buyback is also known as an accelerated share repurchase (ASR). It is a practice that companies follow to buy back shares of its stock from the market. In traditional buyback methods, it may take weeks or even months for the companies to purchase shares from the open market. But in the case of an accelerated plan, the companies ask the investment banks to short the full amount immediately. When the companies purchase the shares that have been shorted by the investment banks, it agrees to bear any losses on behalf of the bank. These shares, rather than being sold, are retired by the company. The buyback programs generally become a common phenomenon during the economic downturn when the stock prices fall to typically low values.

The main benefit of accelerated buybacks is that it gives a big short term boost to share prices of the company. At the same time, the company’s earnings get elevated, and the profitability of the company increases on a per-share basis. The management also uses such a method to alter the earnings figure for reporting reasons and incentive remuneration. This procedure can also sometimes seem to be a strategic move by the companies to shift the risk of stock buybacks to the investment bank when the company senses that the shares are undervalued.

Shareholders, very often, prefer to share buyback programs, despite the risks involved because the ownership held by each investor expands when the number of outstanding shares floating in the market decreases. The company generates higher returns by making its shareholder value less dilute and spreading the same market cap over fewer shares than earlier. But realistically, in most cases, the ideal target is not achieved completely.

The share repurchase programs boost the earnings per share of the company and give a boost to stock prices as well. Apart from boosting earnings per share, the buyback program reduces the value of the assets on the balance sheet. As a result of this, the shareholders’ funds, the return on assets, and return on equity increase because the balance sheet has to remain balanced. Mostly, the repurchase programs target the short-sighted investors.

Since the inception of the Company’s initial share repurchase program in fiscal 2002 through the end of fiscal 2015, the Company has repurchased shares of its common stock, having a value of approximately $60.1 billion. 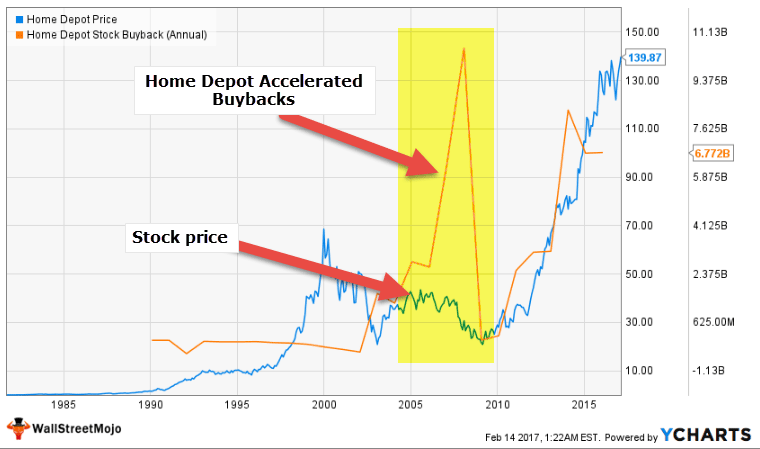 We note that Home Depots Average diluted shares outstanding decreased by more than 30% in the past 6-7 years. It is due to the buyback of shares. 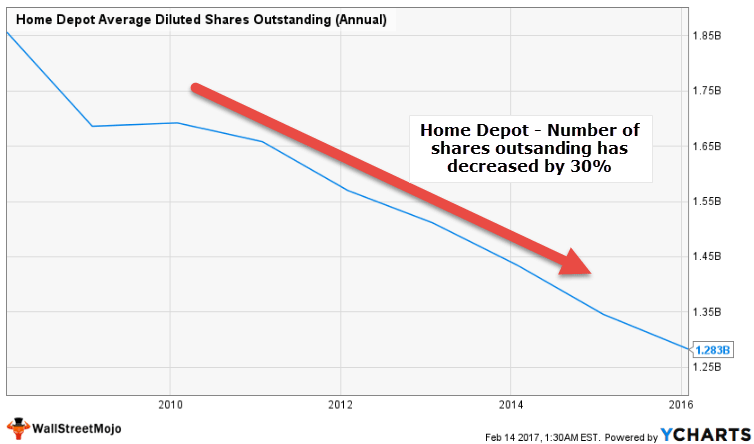 At the end of 2015, United Technology entered into accelerated share buyback agreements with Deutsche Bank AG and J.P.Morgan Chase, with each delivering $3 billion worth of stock under this program. 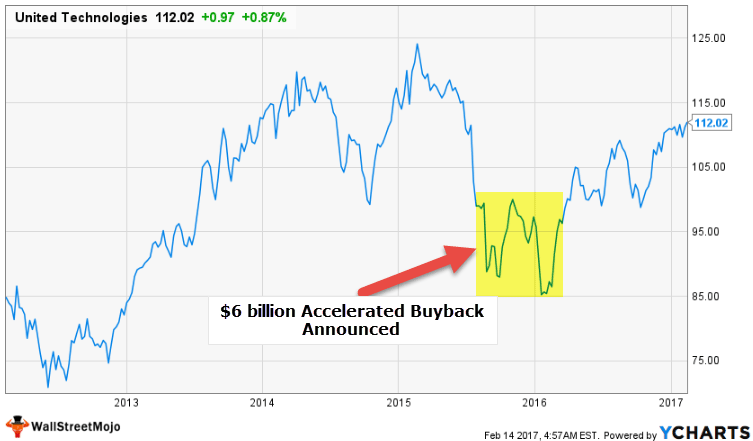 This accelerated buyback was a part of the $10billion repurchase planned for 2016. As per the Chief Executive Greg Hayes, this buyback takes advantage of the “big disconnect” between the company’s value and share price.

If the management of the company believes that the shares are undervalued, they repurchase the stocks and resell them when the price of the stock has been increased in order to reflect the precise value of the firm.

But for the meanwhile, the process of accelerated buybacks does serve some important purposes that are listed below:

In item 703 of Regulation S-K, it is stated that for all repurchases of equity-related securities, the following information must be reported by the company in the form of tables:

Further, the company is required to disclose the above information for each month of the preceding fiscal quarter in the report of the next reporting period.

Additionally, for publicly announced programs, the SEC requires disclosure (in footnotes to the table mentioned above) of the following information:

Generally, these disclosures are also included in the liquidity and capital resource section of the companies’ “Management’s Discussion and Analysis of Financial Condition and Results of Operations,” which is an integral part of their annual and quarterly reports.

A company considering the share repurchase plan should consult outside counsel and other investment advisors. When carrying out the accelerated buyback programs, the companies should review the limitations or restrictions on repurchasing the shares, some of which are listed below:

Many companies face and will continue to face critical choices regarding how to best allocate their surplus cash. An increasing number of companies, over the years, have chosen to repurchase shares of their own stock.

It is also important for a company to critically analyze the implications of share repurchases from a legal point of view, as discussed above in this article so that it can make an informed decision. If a company elects to implement a repurchase program, it should take great care to ensure that the individuals and the institutions, who are given the task of implementing the program, understand the relevant contractual restrictions and statutory requirements as well as the necessary processes required to ensure compliance.