What is Golden Shares?

Golden shares are the shares that provide the special power in form of veto power to the holder of the shares. It provides specific voting rights that act as the tiebreaker. These are the normal ordinary shares, holders of which will participate in profit, and in voting just like other shareholders, the only additional thing they get is the special voting rights during the time of tie in voting and to block the hostile takeover of the company.

The government generally maintains the significant stake in the form of golden shares during the time of disinvestment. During the ’80s, this system was very famous in the market; however, later on, the European Union ban this practice.

Such practice is also used by private companies to ensure the control over their group companies and to prevent the hostile takeover by the third party. Many times such holding is maintained to ensure that entity can deliver the purpose and commitment for which it is being incorporated.

ABC limited, a British company, provides aeronautical services and makes commercial, military, and agricultural aircraft. The company was a private and state-run company from its inception, and in 2016, it initiates public offerings by issuing only 49%. The government maintained a 51% stake in the company. This 51% stake is nothing but the golden shares in its true essence. 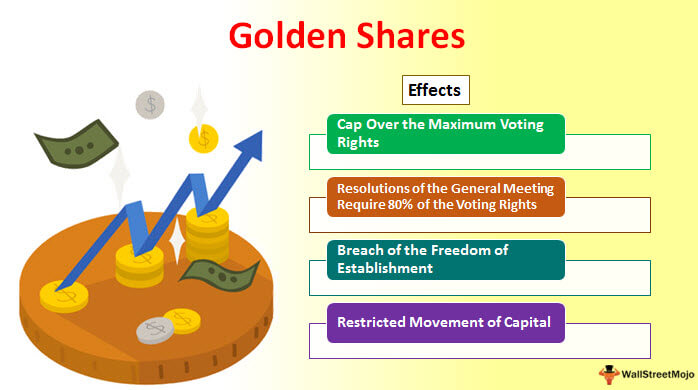 Golden share plays a significant role in keeping the holding of the company in the restricted mode, thereby keeping the decision making to specific shareholders only, and also ensures that the corporation can fulfill the purpose for which it is established. On the flip side, it prevents the voice of minority stake and keeps the company away from the wisdom of minority interest.

This article has been a guide to What is Golden Shares & its Definition. Here we discuss the purpose of golden shares, examples, and effects along with advantages and disadvantages. You can learn more about from the following articles –