Owners Capital is also referred to as Shareholders Equity. It is the money business owners (if it is a sole proprietorship or partnership) or shareholders (if it is a corporation) have invested in their businesses. In other words, it represents the portion of the total assets which have been funded by the owners/ shareholders money.

It can be calculated as follows:

For example, XYZ Inc. has total assets of $50m and total liabilities of $30m as at 31st December 2018. Then Owners Capital is $20m (Assets of $50m fewer Liabilities of $30m) as at 31st December 2018. It can be interpreted from above that assets of $20m are funded by the Owners/ Shareholders of the business. Remaining $30m have been funded through externally sourced funds (i.e., loans from banks, issuance of bonds, etc.) 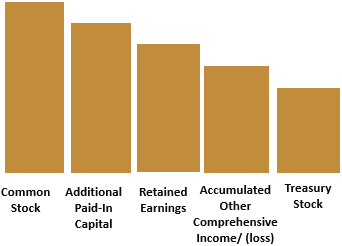 Common Stock is the amount of capital contributed by the common shareholders of the company. It is shown at the par value in the Balance Sheet.

Additional Paid-In Capital refers to the amount over and above the stated par value of the stock that has been paid by the shareholders to acquire the company shares.

For example, if the company earned net income (after paying preferred dividends) of $5m for the financial year ending 2018 and distributed $2m as dividends to its common shareholders. This means that the company’s management has decided to retain $3m in the company for its future growth and investments.

These are some income/expenses that are not reflected under the income statement. It is so because they are not earned incurred by the company but affect Shareholder’s equity Account during the period.

Treasury stock is the stock that has been reacquired by the company from the shareholders and thus reduces the shareholder’s equity. It is shown as a negative number in the Balance Sheet. There can be two methods for accounting treasury stock, i.e., Cost and Par Value Method.

Below are the examples.

Calculation of the Owner’s Capital 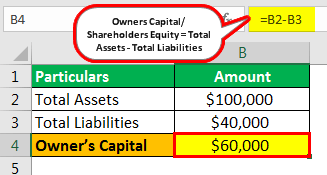 How these figures actually got changed? Let’s understand; Tom must have sold his stock at prices higher than the purchase price. He must have incurred some expenses like electricity, insurance, accounts, finance charges, etc.. Also, he might have made some connections, so he was able to purchase some stock on credit. All these events led to cash inflow as well as cash outflow. The profit he actually made after all these are now added to the Owner’s Capital.

Now if we calculate Owner’s Capital by using Assets – Liabilities formula then we get: 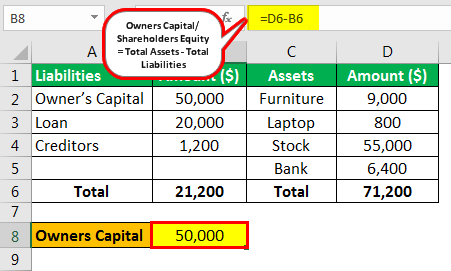 Advantages and Disadvantages of Owner’s Capital

Given below are some of the advantages and disadvantages of the owner’s capital.

Advantages of the Owner’s Capital

Owners Capital is a vital part of any business. It is the base upon which the whole company stands and grows. Business can be carried out with only the owner’s capital or with debt or a mix of equity and debt. An optimal mix of shareholders’ equity and debt is considered as the best option to get leverage benefits. However, the owner’s capital is highly appreciated when the cost of debt is higher than the return business is providing.

Having a balanced owner’s capital shows that the company is secured and does not only rely on outsiders for carrying its business.

This article has been a guide to Owners Capital and its definition. Here we discuss the formula to calculate the owner’s capital along with its components, examples, advantages, and disadvantages. You can learn more about finance from following articles –